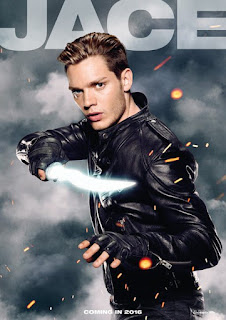 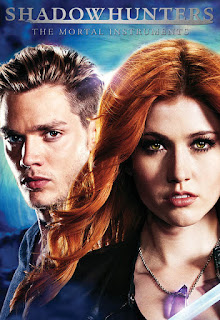 After her mother is kidnapped, Clary must venture into the dark world of demon hunting in order to find clues that can help her find her mother.

Shadowhunters is an American television show based off the worldwide phenomenon The Mortal Instruments book series by: Cassandra Clare. The story follows an eighteen year old Clary Fray, whose entire world changes when she learns of her true destiny,

As most of you know, The Mortal Instruments books was adapted into a film in 2013 starring Lily Collins as Clary Fray and Jamie Campbell Bower as Jace Wayland. However, that did not do well in the box office. There were rumours that City of Ashes was already in the works for a script but unfortunately we never heard any further news about the franchises sequel.

Not long ago, it was announced that The Mortal Instruments books was going to be adapted into a TV show. Along with many others, I followed the casting processes with excitement as well as the behind the scenes photos that were released when the show started to film on set.

Many people have been sceptical about this show, most books fans want adaptations to be faithful to the books. It's great to see that fans are keeping an open mind. The way I see it, the movie has been done. The movie had many elements from the books and it was pretty faithful to the books. Now we have the TV show, and they have said countless times that they aren't connected to the movie and that they were doing something different. They have kept their word. I think it is a wonderful thing that they are taking a different look on things with the show, because if they adapted the book like the movie I think it would be too similar to the movie. What would we be seeing? An adaptation of the books or a copy of the movie?

Pilot episodes are usually very rough. Actors are still trying to get into their characters, the script is usually written in an awkward way, the whole thing is usually a little bit of a mess. With the first episode of Shadowhunters I noticed the flaws but in my eyes, it was better than some other major TV show pilots.

There were actually very few things that I disliked about the first episode. The major issue that I had was the script. As a fan of the books, I notice all of the little Easter eggs that they give us and I'm sure that you notice them too. However, the way it is done in this first episode makes the whole story of the show ironic. Every line they hint at us, is too obvious. There were lines talking about not going on some epic journey, and it just sounded awkward. I kept thinking that things were too ironic because the lines that came out of the actors mouths were not natural. Another thing that I noticed about the script was the world building. This world is very complex and I understand that it can be hard to introduce that world. If you weren't a fan of the books or if you just hadn't read the books at all, you wouldn't be able to understand what was happening. One good thing is that things weren't smushed into one episode, it was kind of spread out. I also noticed that when they are trying to explain downworlders or something else, it's too obvious. It just seems like the characters are spitting out random information but it doesn't sound right. This has nothing to do with any of the actors delivery it's just the lines. In the second episode, Jace says something like "Warlocks Clary, you know they have these sparks come out of their hands." It's too obvious. It just feels like they are shoving this info down your throats and then they just continue on with the story. I really hope that more care goes into the explanation and building of the world in future episodes.

Something that I have been anticipating was how the actors would portray their characters. I was pleasantly surprised with quite a few of the actors, especially the ones we didn't get to see in the trailers and behind the scenes. One of the actors was Emeraude Toubia as Isabelle Lightwood. Emeraude definitely embodies Isabelle, there are a few differences with who she is in the books that isn't going to be shown in the TV show but I hope that won't affect anything. Emeraude does a fantastic at portraying Isabelle, she is using her entire instrument (body) to bring this character to life.   The way she holds herself is so different from when we see her in interviews, and that makes it easy to see her as Isabelle and not Emeruade pretending to be Izzy. The only problem I had with Isabelle in the show is the fact that they are kind of over sexualizing her character, yes Isabelle is that very striking and bold character but I wish they weren't using her character to make the show more interesting because that is what the show seems like it's doing currently.

The next actor was Matthew Daddario as Alec Lightwood. Fans of the books have expressed their love for him as Alec. I didn't know what to expect from Matthew, I had never seen him act in anything other than Naomi and Eli's No Kiss List. Not only does Matthew look the part but he captures Alec perfectly with his bitterness. For months, I have been excited to see how Matthew and Emeraude would act together as siblings and I thought they did a great job. There is that brother sister feel/chemistry between them and that is something I think they missed in the movie because we never really got to see the Lightwood sibling relationship.

Honestly, I loved all of the actors. I would go into more detail, but I feel that, that would be very long. Some people thought that Katherine McNamara and Dominic Sherwood's acting was a little bit rough in the show. I thought that they did a good job. To me, their characters are the most complex and difficult to play. There is a lot of pressure surrounding them and I also think it's difficult because they are trying to separate themselves from Lily Collins and Jamie Campbell Bower (That's what I'm assuming). They want to make their own version of Jace and Clary and I think they're doing great. There was also some people saying that they can't sense or feel any chemistry between Dom and Kat, and to me I take that as a good thing. I think it's more interesting to see that chemistry between characters grow through the episodes. In the books there wasn't any instant love between the two characters so I think this is a good road we are taking.

The strongest characters/actors on the show right now are Alberto Rosende as Simon and Alan Van Sprang as Valentine. There is room for growth for certain characters, and I'm looking forward to seeing how those particular actors grow.

TV shows usually have a fairly lower budget than films. I wasn't expecting anything special or fantastic with the visual FX, but I was very surprised. The demons were something that I was worried about but I was quite impressed. I really like the idea of all of the demons having tentacles come out when they're about to attack. The only thing that bothered me was the portal. It did not look realistic and it just didn't fit with the scenery.

So far, most of the changes in the show kind of make sense. To me, they make sense with the story and their aren't major changes that can affect the main/major plot line. It's very understandable because they're trying something very new and different, and I'm really enjoying it.

However, some of the changes aren't explained well or they just don't make sense. After viewing the first episode, Raquel and I were very confused on why there were so many shadow hunters. Now it seems kind of ridiculous that they're sending these younger shadow hunters on life threatening missions when there are older and possibly more experienced shadowhunters in the Institute... The Institute having lots of technology makes sense to me because it's the 21st century.

Overall, it was a decent episode. I think it was better than some TV pilots that I've seen in my past. There is definitely room for improvement in various sections of the show. I would like to see the script improve and the visual FX. The actors portrayals aren't things that I'm afraid of because I have hope that it will improve. I'm sure they'll grow with their characters. I would rate this episode a 3 out of 5 stars.

My review for the second episode will be going up shortly after the third episode airs.

What did you think of the first episode of Shadowhunters?