I really love watching TV shows. I have absolutely no control over how many episodes of a show I watch. I feel like I do watch a good variety of shows, and I am always trying to persuade others to watch the shows I watch. So I thought this would be a good type of post to do every once in a while when I don't have the time for a book review or other book related post. 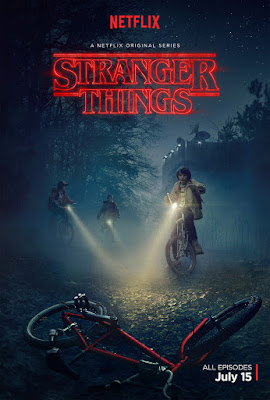 This thrilling Netflix-original drama stars award-winning actress Winona Ryder as Joyce Byers, who lives in a small Indiana town in 1983 -- inspired by a time when tales of science fiction captivated audiences. When Joyce's 12-year-old son, Will, goes missing, she launches a terrifying investigation into his disappearance with local authorities. As they search for answers, they unravel a series of extraordinary mysteries involving secret government experiments, unnerving supernatural forces, and a very unusual little girl.

Stranger Things is a new Netflix Original series that just premiered all of it's episodes on July 15th, 2016.

Netflix can have a lot of great shows, but it can also have some bad ones in the mix. Now I haven't seen many Netflix shows, but from what I've seen this is one of the best shows out there. It only consists of eight episodes, which is a terrible shame but it's amazing with what was put together through such a small amount of episodes. Through only eight episodes, there is some great world building, character development and we are taken on this incredible and fascinating journey.

Stranger Things was a show that was visually appealing to me. The first time I heard of this show I was browsing Netflix, I had just caught the trailer on with no music. In an instant, I had already put it on my list because I was so curious about the show, and from that day forward I was anticipating the release. I do not know if that makes sense, but I guess what I'm trying to say is that this show pulls you in.

Let's talk about the actors on this show. A lot of the talent that is on this show, I had never heard of nor seen before. However, every person on this show is so good at portraying their character. I don't know why, but I was so happy and surprised with the child actors. The kids play such a great role in the series, and I think that they do their part so well. Really random, but they're very convincing as being friends. They have really great chemistry.

The characters on this show all have their own great qualities in their characters. In my opinion, there isn't really a group of actors or a certain person carrying the show. Even if their role is very minor in the show, they still find a way to bring something different and memorable to their character and to the show.

There are several sub plots in the story that all link to the main problem, I really enjoyed that. I find that with the TV shows I watch, the sub plots are usually just romantic relationships and that can get a little boring. With every storyline and character, I always want to know more!

This show has such character and quality. It's also just really well structured. So many things can get lost in TV shows whether it is in story telling itself or the writing of the script, but this show does not have any of those problems. It has a great pace, great characters/actors and as each episode ends, you are left wanting more.

If you are looking for a new TV show to watch, I think that you should definitely check it out! It's only eight episodes (so sad!) but I promise that you will love every moment of it. Or at least I hope that you do.