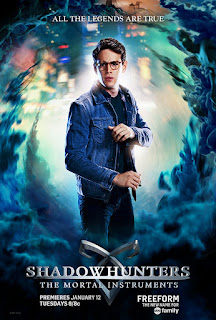 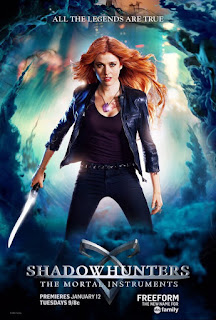 Alec is charged with keeping Clary safe while Jace and Isabelle are sent on an intelligence mission; Clary becomes the quarry of the New York City Werewolf pack.

You can view my other Shadowhunters reviews HERE

Episode five of Shadowhunters was released! Again, I do think that this show is improving. In this episode, there was a little bit more explanation in things that were added which weren't from the books. However, there were also little things from the books that I am so happy that they kept.

There were very few things in this episode that I disliked. A problem that I have been having with this show was the explanation and reasoning behind certain things. In this episode, a werewolf pack kidnaps Clary because they think she information about The Mortal Cup. It seemed like the werewolves wanted the cups for themselves, and that didn't really make sense with both the book and the show. The Mortal Cup does not belong to the Downworld, it belongs to the Shadow World (unless I'm remembering this wrong.) So why would they want The Mortal Cup, what would be the use of it to them? I kind of just wish that was something they could brush over, because it doesn't make sense right now. 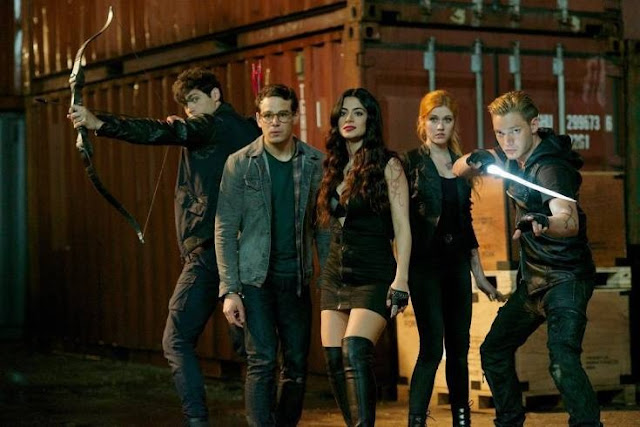 Another thing was Clary's necklace. In the past episodes, we weren't getting full explanations. This episode we find out that it is a portal shard which is the reason why Clary can see her mother. I am okay with that but it still kind of confuses me how Valentine knew that Clary was watching them. Right now, I do not know if they're going to go further with that storyline because it doesn't seem like they are.

I have really been enjoying seeing Valentine in these episodes. I think it's really interesting seeing him in Chernobyl with all of his experiments. In this episode, it looks like Valentine is starting to create a Forsaken army. At least, that's what I think he's doing. I believe it was mentioned in that small time span that we saw him in that scene. I am really interested in seeing how the Forsaken are going to look (if that is what's happening) and where this storyline goes because it looks like they're combining both the City of Bones and City of Ashes plot lines and meshing it into one.

A big controversy that is happening with the show was the fact that Isabelle didn't know about her fathers affair. In the book, we know that affected her greatly. In the show it's a little bit different. However, I saw pictures from either the next episode or a future episode and I realized that Isabelle's clothes weren't as revealing. Also, Emeruade Toubia posted a photo of Izzy in one of the episodes saying, "Next episode is one of my favourites" and  "#izzy changes her ways..." That just made me think that maybe this is where Isabelle starts to grow as a character A.K.A she learns about her father's affair. I could totally be off with this theory, but to me it's definitely a possibility because in the pictures, Isabelle does look more reserved and somewhat hurt.

Characters that stood out in this episode were Clary and Alec. They both have great chemistry together, and their relationship is very believable. I loved the scene where Clary and Alec were talking about Jace, the way they were bickering at each other was really funny.

Throughout this whole episode, I couldn't help but feel bad for Alec because he was always getting yelled at by Jace. That is probably the only aspect we are seeing from their relationship. I was really looking forward to seeing their parabati relationship shine in this show because we never saw that before in the film. That is another thing I hope that they reflect on more throughout the show.

A character that was introduced in this episode was Maryse Lightwood. She definitely looks like she could be the mother of Alec and Isabelle. I really like how she is very stern and professional but I don't really remember what she was like in the books. I know she was very strict but I don't remember her being so distant from Isabelle. I am looking forward to seeing more from her in future episodes.

If you've read the books, you know that Simon turns into a vampire. In this episode, he has certain abilities that mundanes shouldn't have. You can tell that his transition into a vampire is being hinted. It's really interesting to watch, but I don't understand how he could have those abilities before the actual transition. Right now, he is still human. Maybe the writers are just doing this so there is the idea imprinted in our minds but I think it kind of ruins the element of surprise. I would've much preferred not seeing any of his enhanced abilities, and just finding out later on.

As we all know, the visual FX of the show aren't the best. However, I was pleasantly surprised with how the werewolves came out. I was really happy that we got to see them because we didn't really see much of them in the movie. I honestly thought that the wolves were quite believable, it wasn't as bad as I was expecting. The wolves definitely look more Twilight/True Blood looking and they're not as intense as the movie wolves but I actually quite the look of them. The only problem I have is the way the turn back from wolf to human/human to wolf, I don't like the green poof.

In every episode, there is always a weird effect that happens during training or fight scenes. It makes the characters look like they're going in slow motion but then they're not? It just makes me feel dizzy, it doesn't add anything to be honest. I think the fight scenes would look a lot more believable if those FX weren't there. Those FX look like they're trying to intensify certain aspects but then they're not, as well as trying to show how Shadowhunters abilities but it doesn't show. If we get a second season (hopefully we do) I really hope they get rid of of that effect.

One of my favourite parts of this episode was the reunion/meeting with Clary and Luke. I thought the scene was very amusing. The part where Clary is holding the stele at Luke was shown in a trailer, and people were very confused because they knew Luke wouldn't be scared of it. The way he responded was so great, his line was "You know you can't cast spells with that thing?" I just thought it was hilarious and it was the perfect way for Luke to respond. I also love the part where Luke picks her up and Clary says "Where are you taking me?" You can really tell how Luke care's about Clary which is something that I personally love.

A rumour I heard was that the show wasn't going with the incest route with Jace and Clary I am so glad that they included the box that Jocelyn would cry over every year. The contents in the box looked like a baby shoe and something else I didn't see. It seems like they are going down that road and I am really glad that they did. If they aren't, I don't really see how they're going to include the box.

In the show, you can tell they are changing certain things for the sake of showing a characters strength. I don't have a problem right now, but sometimes the changes do not make sense.

The lines in the so how are still quite cheesy and a little cringe worthy, but it is improving in a sense. My hope is that they will improve in future episodes.

I know I am not really comparing the books to the TV show, that is not what I'm trying to do. I will obviously mention things from the books but my motive is to review and discuss the TV show because I view them as separate things.

Overall, I really enjoyed this episode. I really loved what every actor brought to their characters in this episode! To me, the show is growing and it's finding it's voice in the world. I am really looking forward to future episodes! I would rate this episode a 4 out of 5 stars.