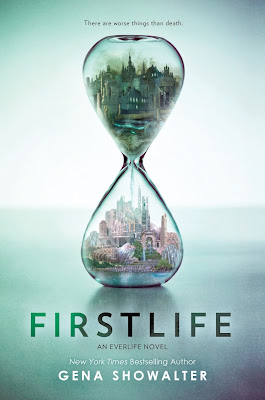 ONE CHOICE.TWO REALMS.NO SECOND CHANCE.Tenley “Ten” Lockwood is an average seventeen-year-old girl…who has spent the past thirteen months locked inside the Prynne Asylum. The reason? Not her obsession with numbers, but her refusal to let her parents choose where she’ll live—after she dies.There is an eternal truth most of the world has come to accept: Firstlife is merely a dress rehearsal, and real life begins after death.In the Everlife, two realms are in power: Troika and Myriad, longtime enemies and deadly rivals. Both will do anything to recruit Ten, including sending their top Laborers to lure her to their side. Soon, Ten finds herself on the run, caught in a wild tug-of-war between the two realms who will do anything to win the right to her soul. Who can she trust? And what if the realm she’s drawn to isn’t home to the boy she’s falling for? She just has to stay alive long enough to make a decision…

This review will be SPOILER-FREE
Before I wrote this review, I was really conflicted on whether or not I wanted to write this review. Most of my reviews are pretty positive, and if there is something negative about them there is always something to bring the light back up onto the surface. Originally, I was going to try and sneak off by not writing a review by putting a small one into my wrap as I always do. I am a book blogger, and I read books and I review them so that is what I am going to do.

I discovered Firstlife while watching videos on Youtube. I was immediately attracted to the cover as one is. Obviously, I looked it up on Goodreads to check it's rating and it came to a 3.81. That isn't a terrible rating but it is also not a great rating. I was so tempted to not pick it up, but I did and honestly I wish I hadn't. For the first few chapters of this book, I was quite enthralled with the storyline. Yet as I got further and further, I felt very uneasy. It's such a shame that I didn't like this book because to me it had so much potential to be this amazing book but it just didn't make it there.

The lowest I have rated a book that I disliked was either a 3 or a 3.5 out of 5 stars. I rated this book a one. Usually when I find a book that I'm not fond of, there are factors about the book that pull the rating up but this book didn't have anything that I liked or enjoyed.

A huge thing that I believe to be so important in books is the writing. I couldn't put my finger on it in the beginning and honestly I still can't but I just wasn't having the writing. The characters voice is just a little bit annoying.  The writing is incredibly choppy as well. There are also things that come out of her mouth that are just so ridiculous and unreasonable. I also couldn't connect with this character whatsoever. Ten was a very flat and generic character in my eyes. While this book is fiction, it is nice to have some realism even if it is based in a fictional world.

It was also constantly mentioned that Ten was "special" and I really hated that. I think a lot of readers are tired of seeing that someone is special because it is something we have seen over and over. Ten wasn't a character that had any original or qualities to her in my opinion. Her entire makeup is something that I have seen in past novels, and she was just a very generic character. She's also very moody and we are never really given a reason on why she is like this, we never were told in detail.

I hate to say it but there are several moments in this book that are cringe and eye roll worthy. There are weird romantic moments between the love interests and there is a HEAVY dose of insta-love. There are a lot of factors about this book that could've been done well but weren't. Such as the love triangle...

Another factor about this book that I didn't like was how slow and dragged out it was. This book could've easily been around 300 pages. The entire book was just a waiting game. Not to mention that there were plenty of plot holes and unanswered questions throughout the novel. As I read, I kept asking myself, why?

As a whole, the book really just fell flat. It was basically a plateau. There was nothing really special about the book, it didn't have a wow-factor and I believe that it wasn't put together well. It had great potential to be fantastic but it just wasn't that great. It could've improved with a lot of the aspects if I may say so myself.

Overall, this book was very hard to read due to lack of connection, plot holes and other things. Most of the time, I was skim reading because nothing was catching my eye. I just wanted to get on with the story but unnecessary things were being dragged out. I think I'm most disappointed in the writing because that can really make up for a lot of things. I truly do believe that if this book was restructured a little bit, it would be really good. I really wanted to like this book but in my eyes there was nothing that saved it for me, therefore I would rate this a 1 out of 5 stars.