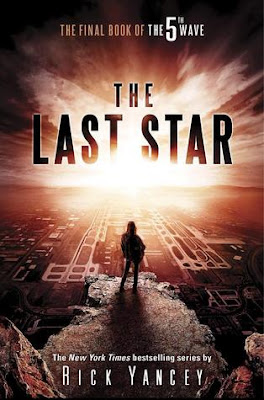 
But beneath these riddles lies one truth: Cassie has been betrayed. So has Ringer. Zombie. Nugget. And all 7.5 billion people who used to live on our planet. Betrayed first by the Others, and now by ourselves.

This review MAY contain SPOILERS

The Last Star is the the third and final book in The 5th Wave Trilogy by: Rick Yancey! It follows some of our beloved characters on a life or death journey in an apocalyptic world. This review will mostly be spoiler-free but I will be discussing a major point in the book that you probably won't want to read if you haven't finished the book yet, so if you haven't finished the book please skip the first paragraph. Now, let's get on with the review!

Okay, let's just discuss the elephant in the room. Cassie's death. It is always really horrible when a character you love just dies. Of course, when I found out that she died, I was very angry. However, as I continued on with the book, I realized that I couldn't see it ending any other way. As much as I would've liked Cassie to settle down with Evan and have little children, it wouldn't be right in my opinion. Just think about it, Cassie is this independent strong female character who would risk anything to save people. I feel like her story only had one route and that was to die. I know that sounds weird but I couldn't see her story advancing in any way whatsoever. At first I was very in denial about the subject and I wanted it to be undone but in time I just accepted it.

A huge relationship in this series that I loved in the books was the relationship between Sam and Ben or Zombie and Nugget. Their bond is something that really just warmed my heart, especially on the very last page of the book. The words that Ben said to Sam brought tears to my eyes, and I'm honestly kind of tearing up just thinking about it. It was such a beautiful yet bittersweet way to end the book.

I found that this book was a lot better than The Infinite Sea, I thought that it was well paced, action packed and well written. Rick Yancey has a really great writing voice in my opinion, I feel like it's just a really good story telling voice. It really just pulls you into the story and always has you itching for more. I also absolutely love the feeling I get when I pick up his books because, it's like watching an action movie. My heart is always beating really fast and I always react when there is a plot twist or reveal.

Let's talk about the character growth in this book. To me, all of the characters had changed so much. Many were really broken, and that was really interesting to read about. It was so sad to compare them to their past selves because you know that they are never going to come back from that. You know, you can't really expect characters to be all sunshine and rainbows when they've went through an apocalypse and watched everything be practically ripped away from them.

With how this story was laid out, it is understandable to see how it ended. Their world is broken, and it's not something that you can recover from or build back up. Something that I loved about this series is that it is so raw. It get's down to the bone and shows you the horrible things that happen.

For those of you who are upset over the ending and are really angry, that is no reason to rate a book low. I have passed by so many reviews rating something 1 or 2 stars simply because the book was "depressing" and or "sad". I'm sorry, but I don't think that thats a valid reason to rate something low just because it didn't live up to your personal fantasy that you wanted in your head. This book is not centred around the romantic interests or how happy or sad it is, it's so much more than that. Books are so much more than that.

Overall, I thought that this was a great and solid conclusion to the series. Yes it was sad, but it's a story about an apocalypse. I thought that it was a really bittersweet ending and it was not how I wanted it to end obviously, but it did and I am very happy that it ended like this. If you're hesitant about picking this up, I encourage you to do so. For me, it was worth the read. I would rate this a 4.5 out of 5 stars.