Clary continues to struggle with the new Shadowhunter order as Jace is being held in the City of Bones.


Episode 4 of Shadowhunters just aired and you know what that means? NEW WRITERS AND SHOWRUNNERS! This episode was very interesting to say the least, it's one of those things where I have very mixed feelings about it because I currently have two brains telling me what I should be thinking. There is the book brain and there is the Shadowhunters fangirl brain.

There were a lot of things that I loved about episode 4 but this was one of those episodes where the book brain took over the other half of my brain that wants to so desperately avoid the thoughts I'm about to discuss. Alright so Jocelyn dies in this episode and um---it's because of demon possession. You see, I don't really have a problem with her death it's more with the major plot hole of demon possession in Shadowhunters. You can take Cassandra Clare's books, take it's characters and butcher the storyline but when it's set in the world, I think it's only best to follow the rules that are given in the original text because if you don't the entire thing is gonna be a mess. And although the demon possession thing didn't make sense, it was actually done pretty well. The structure was done well, there weren't any cheesy lines, it all flowed together really well which was something I was happy to see. 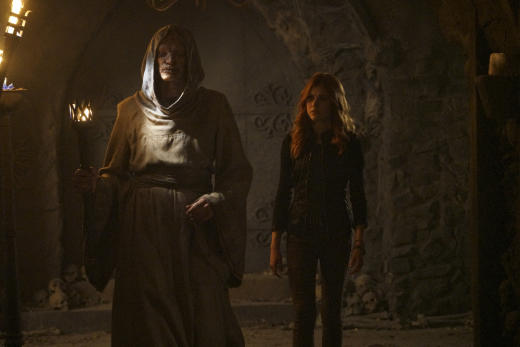 The whole Jace and Clary relationship in the show has been a little rocky---and I don't mean the brother and sister thing. From the very start, their relationship never really felt like the Clace I read about in the books. A huge thing in City of Ashes is how Clary and Jace still have feelings for each other despite their new found sibling title. And we got to see that in this episode---and it was BELIEVABLE. I cannot express how much I loved Dom Sherwood's portrayal of Jace in this episode. It honestly felt so much like Jace that it came to a point where I thought I was watching a scene from the books.

We got a really great scene between Jace with the mortal or was it the soul sword? Aldertree (rumoured to be Sebastian in disguise which makes no sense at all, but it does with the history of the show. Will discuss later.) is interrogating Jace, and it was such a strong scene. It was very mysterious and eerie and it was possibly my favourite scene from the show, I almost wrote books. Whoops. 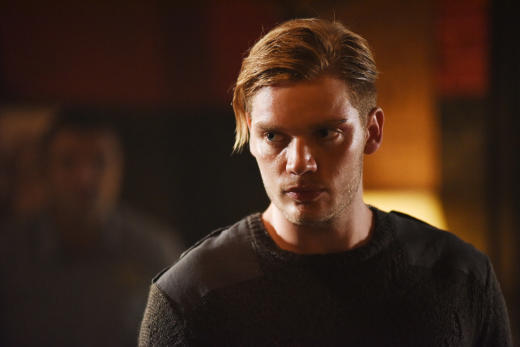 As a whole, I do believe that the acting in the show is getting better with each episode. Compared to last season, the acting has improved a significant amount and is continuing to improve with every second we spend with the characters.

On the topic of acting, many people were both pleased and not pleased with Katherine Mcnamara's portrayal of Clary's grief in the episode after Jocelyn's unfortunate death. This is one of those things where I can see from both sides but I personally believe that it was done well. Her death was ever so sudden, and while it may sound harsh to say there were a lot of things happening in the institute that were greater than mourning her mothers death. And I felt that the writers wrote that story arc very well. Clary is both saddened and angry, and she showcases her anger through the killing of the demon. However, the way Clary let her emotions flood into her at the end of the episode was so gripping to watch. No words came out of Clary's mouth, the physicality of that moment was a very "oh my gosh", moment if you know what I mean. It really set things in stone, and put things in perspective.

As a book fan, I am not angered by this. For the show, I believe that this was a good change. I know a lot of people are, but Shadowhunters has already strayed off so far from the books and I am not one to hate on the show solely for that one thing. I expect them to make changes, and while I may not always be happy with the changes, I have to accept and respect those decisions because it's out of my control and I want this adaptation of the books to succeed.

If they are going to stick with this storyline, we will be on a road to a very interesting story arc for Clary's character, and it will for sure bring chaos to the others as well. The show is already getting so much stronger in terms of the script, the acting and the overall look and world---and I have so much hope for the future of this season, and hopefully for future seasons as well.

Alright, so a scene that I absolutely hated in this episode was a scene between Camille and Magnus. I really love Camille but for some reason her appearance in this episode was honestly one of the most annoying things I have ever seen, it was absolutely ridiculous and I couldn't believe what I was seeing. It had a very interesting concept and had potential, but on one hand Harry Shum Jr. was being Magnus but Camille? There was something off.

Magnus was absolutely fantastic in this episode. We saw this whole new version of Magnus that we didn't see last season, or really in the last three episodes. He got really grounded in this episode, and I feel like I've been saying this a lot and I probably will continue to do so for a while as the second season is still developing into the show I personally hoped it would be.

There was a lot of book content in this episode which was something I was so unaware of until I watched book tuber's reviews on youtube. And when I watched those, I had this feeling of realization I guess about my feeling familiar with certain Jace scenes, it was because I was literally watching adapted versions of scenes from City of Fallen Angels. It's been a long time since I've read the books, and I don't really remember anything that happens so you could imagine my surprise when I figured this out. I really liked this honestly, to me this shows that writers and the show runners are a little bit more respectful of the original content---not the past ones weren't but we never got an almost accurate scene from the books in the first season. It was always interpreted in a weird way. Anyway, I hope that this is a sign that we will be seeing a storyline from the books soon!

So, remember when the show runners were like "THERE'S GONNA BE A TWIST THAT BOOK FANS WON'T SEE COMING," during the first season. Yeah that twist was that Michael Wayland was really Valentine, which thinking about it now it was super obvious. Just saying, it's going to be hard to trick the book fans, that's just a fact. So, something that's been puzzling fans is why the hell does Victor Aldertree have an English accent? And why is he so mean towards Downworlders? The possible answer to that is Sebastian. You see, Will Tudor was recently cast as Sebastian and in article one of the show runners states that he is going to have a BRITISH accent. Many people are speculating that they are going to use the same plot twist as last season... If they do this---I don't know how I'm going to feel. Sebastian is really Jonathan so---is he just going to be Aldertree while pretending to be Sebastian but really inside he is Jonathan. If this theory is true, I'm going to be so pissed because not only was this used last season, but it won't work considering Sebastian is already a disguise. And I really don't want to see the stupid shapeshifting rune.

What did you think?