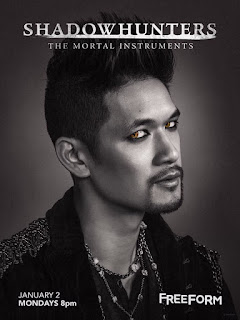 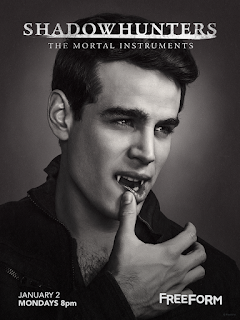 Clary struggles to find where she belongs, whilst Simon seeks Magnus' help.

The second episode of Shadowhunters season 2 will leave you asking yourself, what the hell just happened? And when I say that, I don't mean it in a good way. While last year---the second episode of the season was an improvement, I hate to say that "A Door Into The Dark" wasn't. Although I wouldn't say that it was worse than the first episode, it certainly wasn't perfect and throughout the episode I found various things that I both liked and disliked.

A lot happened in this weeks episode, and I don't really think that we had to see some of it as some of it didn't really contribute to the main plot line---and it kind of just resulted with a lot of unnecessary plot points. However there were a few scenes with various characters that I really liked, and I will discuss those with you now.

The first thing was Jocelyn. I haven't really been a fan of her in this adaptation of The Mortal Instruments---I don't really know why I was just never too fond of her portrayal. We got to see this scene between her and Clary talking about you know---the whole trying to kill Jace thing and I thought it was done really well. She mentions that she really did love Jonathan and in that particular moment, I really felt for her and I could feel her pain. That was probably one of the best scenes that we got to see from her.

However, there was something about the scene that I would've loved if it weren't so dramatic and that was the memory/flashback with Jocelyn and Jonathan. We got to see the black eyes which is a factor in her knowing it's Sebastian---and I'm glad that they kind of just showcased it in a way of him using his demonic abilities and not just the way his eyes looked. However, when Jonathan is destroying the flower... I just thought that it was really, really overdone. With the intense music and the way Jocelyn reacted, it was so overdone and it could've been done well if not for the dramatization of the killing of a flower.

The next thing is Clary, in this episode we got to see her struggle with wanting to be a mundane or shadow hunter. I was actually really looking forward to this story arc of Clary, and was not expecting to see it so soon. By the looks of it, it does sort of seem like they are done with that arc as it wrapped up pretty quickly within the episode which kind of saddens me because I was looking forward to it. Lately, they've been speeding through many, many things and we've only seen two episodes...

Another great thing about this episode was the dynamic of Simon and Magnus. It was really fun watching the both of them as both Harry Shum Jr and Alberto Rosende have great chemistry.

There was one major aspect of this episode that really aggravated me and that was the choppiness and how rushed this entire episode was. We still have the same writers as last season, and at first I was like maybe theres hope having seen the first episode. This episode totally knocked that out of my mind. While we do have less cheesiness, it's still incredibly choppy and it's so confusing for the viewers to watch and it's just really distracting. There were so many things between all of the characters that was stuck into one 45 minute maybe less episode. It was so rushed. We went from scene to scene to scene without the chance of being able to take in what had just happened.

And the way it was shot and edited was so awkward? The first episode was shot beautifully and this one? This episode had so many weird angles---and the cuts were very out of place and that paired with the the excessive amount of scenes we got just resulted in a very weak episode.

I hear there will be a change with the writers room, and I believe that's coming in episode 4 and I can't wait for that.

In this episode, we got to see Dot and this may be coming from my distaste for her character but I don't think her character was needed. We thought she died, and in my opinion we didn't really know her character well enough to care. So when she showed up, I was like why? Dot is the character that helps Clary and Jace escape, and the script was trying to play Dot and Clary's relationship to be this whole sentimental thing but I didn't feel any of it. We clearly are supposed to. However, I truly only think she was used as an easy escape. Clary and Jace need to get off the ship, and no other warlock would probably help them. What's the solution? Dot.

Also, the whole thing with Clary and Jace on the ship was another thing that was rushed. And, how the hell could Jace believe Clary when everything she is saying is so not Clary. I mean, he loves her and he's known her for a good amount of time to know her well enough to know what she feels. It was just so unrealistic and in my opinion was only used to steer Jace into the dark path he is going through.

Well, those are basically all of my thoughts for episode two! What did you think of it?