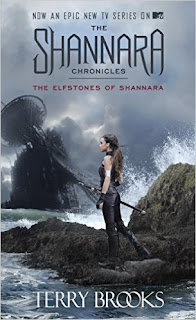 Ancient Evil threatens the Elves: The ancient tree created by long-lost Elven magic, is dying. When Wil Ohmsford is summoned to guard the Amberle on a perilous quest to gather a new seed for a new tree, he is faced with the Reaper, the most fearsome of all Demons. And Wil is without power to control them....

This review WILL be SPOILER-FREE
In case you didn't know, The Shannara Chronicles has been adapted into a TV show by MTV. It is based on the second book in The Shannara Trilogy, The Elfstones of Shannara. The TV show stars Austin Butler, Poppy Drayon and Ivana Baquero. The TV show was something that I started watching because I had nothing else to watch. For a new fantasy TV series, it was very good and I highly suggest that you go and check it out if you haven't already.

Throughout this book, I experienced many highs and many lows. This book is close to 600 pages but it felt like I was reading a 1000 paged novel. There were many times when I wanted to have a change of pace in the story or see into another characters mind, that did not happen. I found myself reading from the same POV for many, many chapters. When there are multiple POV's I like for them to switch often because that way we are left with a possible cliffhanger and then the suspense increases. I did not have any urge to keep reading because there were points that were very slow and it was being dragged out for a very long time.

The world in this book is very rich. It is very unique but it isn't difficult to understand. I thought that the world was built nicely but I still felt like all of the explanations were almost told too well. As I read, I noticed that the characters would be speaking for a certain amount of time but they described everything so vividly. While that isn't a bad thing, it would be nice not to have five pages explaining the power of the elfstones.

If you have watched the TV show, I do suggest that you read this book because it gives such a deep insight on this world, and I found that it actually gave me a better understanding. I think the reason behind this is because of how descriptive it was. I wasn't really a fan of how the characters voice/dialogue was used to explain certain things in this world. I just found that this dragged the scenes even further. I personally like reading an authors voice when it comes to world building.

The characters in this book were very different from anyone I have experienced in other novels. From the very beginning, I just felt like they were all very noble and brave and I wasn't even that far in to the book. This may sound weird, but it was almost they had a certain energy that made them seem so brave.

I have never read anything like this before. The entire concept is very simple but it's very unique. It combines so many elements and it just blends together very well. There isn't anything that I can compare it to because it's just so different from anything I've read before. I would recommend this to any fantasy lover out there.

There were many moments when I was completely captivated by the story and there were times when I was quite bored due to the pacing.

I loved how this book was filled with adventure. However, what I loved most about the book were the characters. I love how these characters are flawed. I love how they are brave but they have fears and doubts. That is not something that I see in YA literature. I don't know if this is a YA book or not but it's just really interesting and fascinating to see in a fantasy novel.

Overall I would recommend this to you. If you're not that familiar with fantasy I do not suggest reading just because of how everything is laid out. However you can still pick it up. If you love fantasy adventure and noble characters you would love reading this. I would rate this a 4 out of 5 stars.