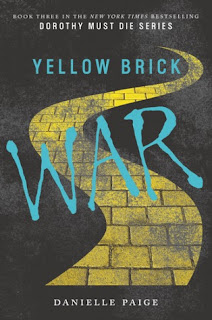 In this dark, action-packed third book in the New York Times bestselling Dorothy Must Die series, Amy Gumm—the new girl from Kansas—must do everything in her power to save Kansas, kill Dorothy, and make Oz a free land once more.

Amy Gumm’s mission to take down Dorothy Gale is not going according to plan. Dorothy has found a way to bridge the worlds of Oz and Kansas, and if the power-hungry dictator of Oz has her way, Kansas will be destroyed forever. Now, Amy has to team up with the Revolutionary Order of the Wicked to save her home, restore the balance between the magic and nonmagic worlds, maybe get the guy—and kill that not-so-sweet Kansas farm girl once and for all.

In the third installment of the New York Times bestselling Dorothy Must Die series, Danielle Paige’s twisted versions of beloved Oz characters are back, including the biggest, baddest, most famous of all: the Wicked Witch of the West.

Welcome to the other side of the rainbow. Here there’s danger around every corner, and magic shoes won’t be able to save you

This review WILL be SPOILER-FREE

Yellow Brick War is the third book in the Dorothy Must Die series by: Danielle Paige who is a New York Times Bestselling Author. The Dorothy Must Die series follows a pink haired Amy Gumm who finds herself in a corrupt Oz. In this Oz, Dorothy has come back from Kansas and the power has made her mad. All of the magic has been sucked out and everything has been twisted into this horrible place and its all because of Dorothy. Amy is recruited by the The Order of The Wicked, and she has a mission to kill Dorothy.

As I read through this book I started to compare this book to the first two. One of the reasons why I fell in love with this series was because of the darkness of this world. I felt that, that darkness was not show well in this book. It was no where near as disturbing or creepy as it was in the first book and that is something I wish was kept. These books are still dark but they're dark in a different way.

I enjoyed this book more than I did the second. Ever since I read The Wicked Will Rise I have been left with the feeling of wanting more. The last two books in this series are less than 300 pages, and I feel like things would've been a lot more interesting and successful if these last two books were combined. There were certain events in this book where it was leading up to this epic moment but it would quickly decline the moment after. It was anti-climactic. I wanted more. The events that took place in this book were a little rushed and that is why I wished this was combined with the last book. However, despite the pace of the book and the anticlimactic scenes, there were a few scenes that had my jaw dropping.

Something that I have admired about these books was the writing. I feel like Danielle Paige is a very strong writer and is one of the strongest (at least from the one's I've read) out there who writes YA books. I could tell that she has come very far from Dorothy Must Die because her writing has improved and that is always important and fantastic to see in books, especially series.

Next, I would like to talk about the characters. I love all of the characters in this world and I have since I read the first book. However, I didn't see much character growth in Amy. Amy is already this spunky character and she is quite strong herself, but there wasn't any growth in her character. I compared her character to herself from the first book and I couldn't find any differences. I mean she has grown stronger with her magic in this book but her voice is still the same, her motives are still the same, her feelings are still the same. That is one of things that disappointed me in this book.

Overall, I did like this book. I was left expecting more but that didn't affect my love for this series. I am looking forward to seeing how Danielle Paige continues writing this story because it left on a very open ended note. I would rate this book a 3.5 out of 5 stars. If you haven't picked up this series, I highly suggest that you do. It is one of my favourites.