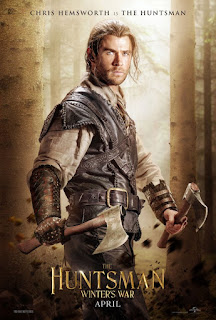 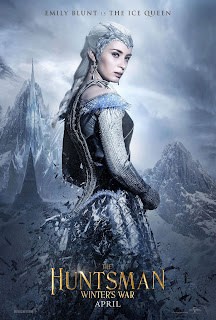 Betrayed by her evil sister Ravenna (Charlize Theron), heartbroken Freya (Emily Blunt) retreats to a northern kingdom to raise an army of huntsmen as her protectors. Gifted with the ability to freeze her enemies in ice, Freya teaches her young soldiers to never fall in love. When Eric (Chris Hemsworth) and fellow warrior Sara defy this rule, the angry queen does whatever she can to stop them. As war between the siblings escalates, Eric and Sara unite with Freya to end Ravenna's wicked reign.

This review MAY CONTAIN SPOILERS.
The Huntsman is the latest instalment in the Snow White & The Huntsman film franchise. Unlike the first film, it is directed by Cedric Nicolas-Troyan and does not star Kristen Stewart as Snow White. It follows the story of The Huntsman, Eric and a few companions on a journey to destroy the evil queen's mirror while also trying to take down two powerful queens.

Snow White & The Huntsman is one of my favourite movies of all time and I was always hoping for and anticipating a sequel. Maybe it's just me, but I felt like they kind of marketed the film wrong. In all of the promos and trailers I have seen, it has been telling us that we were going to know the story before Snow Whites. While it did do that, that story only played out for the first half hour of the movie? I was expecting a full on prequel, instead it was a prequel, sequel.

Rupert Sanders was let go from this movie, and for me it was nice to see that this director had his own take on this world but still had elements from the first film therefore he respected the material. If you have read some of my past film reviews, you would know that I have a big problem when respect isn't there. As I watched the film, I could tell that it was done by a different director but it didn't bother me because of the elements from the first film.

While I did enjoy the storyline I still do wish that it had Kristen Stewart as Snow White, and hopefully if there is a third film she will be included. I have heard rumours that this was going to happen. This may be just my opinion, but I feel that adding her character along with Sam Claflin's character would only strengthen the following films.

Lets talk about the characters! We are introduced to a few new and different characters in this movie ranging from dwarves to queens. One of my favourite characters from this movie was Emily Blunt as Freya. I absolutely loved her character, it was so fascinating to learn and watch about Freya. There were so many moments in the film when I was wondering if I should hate her or feel sorry for her. Emily Blunt did a wonderful job bringing this character to life. The only problem I had with the Freya and Revanna was their family tree. Revanna's brother is not even mentioned in this film, and that's a little bit of a pothole. 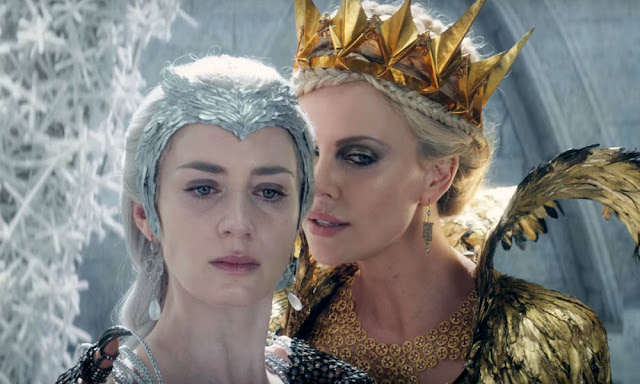 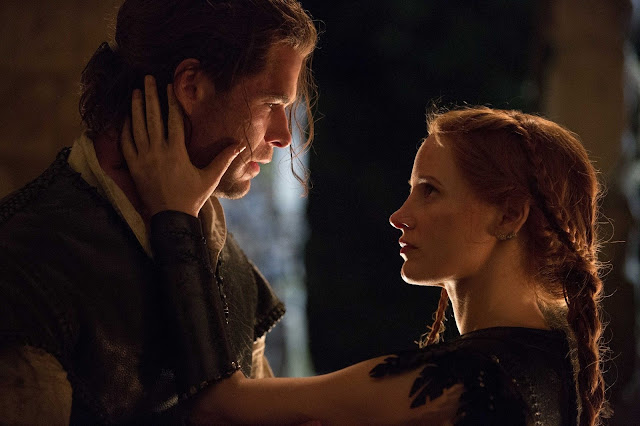 Something that was slightly hinted at in the first film was the potential love triangle/romance between Snow White, The Huntsman and William. This was just a little something that was bothered me considering the fact that Snow White was awakened by The Huntsman kiss. I don't know if this was important or not and I get that, that Eric is in love with his wife but it would have been nice to at least see some affection towards Snow White even though she didn't show up in the film.

The Huntsman is very aesthetically and cinematically pleasing. I really loved how they set up this world, I noticed that everything was a lot brighter and lively. Also the costumes are great.

Charlize Theron as the evil queen was so great to watch. I found her return a little strange, it honestly just felt like the writers just made it up even though it didn't really fit in with the first film. It's totally fine, but plotholes. That is only my opinion though, I could've missed a few things.

Something about the movie that I found was that it was a little predictable. To me, all of the hints they gave us were kind of obvious.

While I did love this film, part of me kind of wishes that we got more of a prequel because I was really looking forward to dive into that part of the story and we only briefly did.

Overall, I really liked this film. I still prefer the first film just because I felt that it was a little bit stronger than this one. I loved the characters that were brought into the franchise and the actor's who played them. My hopes for a sequel (if there is one) is to have Kristen Stewart in it as well as more Sam Claflin. I would rate this film a 4 out of 5 stars!