Beyond the Shadows: The Making of Shadowhunters | Discussion | Faith 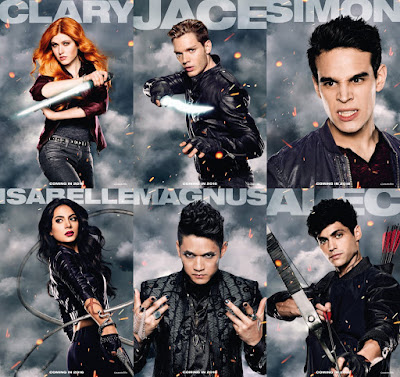 Follows the adventures of Clary Fray, a girl who discovers she is a shadowhunter. She must seek out others like her and descend into an alternate New York called the Downworld.


On December 6th ABC family soon to be Freeform released Beyond the Shadows: The Making of Shadowhunters. The special had an exclusive look at Star Wars: The Force Awakens.

I was very excited to watch this special because I just behind the scenes things very interesting. Unfortunately, I wasn't able to watch it for a few hours but when I did eventually get to it I wasn't disappointed!

I've said this before and I think it's quite obvious, it's always nice to have accurate book-film adaptations. From this special, you can tell that it is going to change a few things and not really follow the books path line. However, the adaptation not following everything word for word does not mean that it won't be faithful to the books. A lot of the changes I saw, I was nodding my head because those visual changes made sense to me. Many people were mad about the Institute having a lot of technology, but to me it makes sense. These people are living in the modern world and it would make sense for them to have some technology. In many interviews, the actors have said that they roughly get to the same plot points as the books but the journey is different. I am okay with that as long as those changes don't affect the future story lines.

In terms of the accuracy of the TV show, I am positive that we're still going to see Cassandra Clare's world in the show. It might be told in a slightly different way, but then again the changes make sense from what we've seen. I have a feeling that her work isn't going to be butchered, it's still going to be there. I don't think there's going to be major changes, I think the changes are going to be things that were just built on what was already in the books.

Something that I'm going to confess is that I was a little uncertain about Kat Mcnamara as Clary. The only thing I had to judge was the 7 minute clip and the trailers that they have released. Pilot episodes are usually very awkward with the acting and writing. I tried my best not to judge but it was one of those things I couldn't avoid (I honestly think it was just influence because I was really confident in her before I saw people's ignorant comments). I believe that the things that were shown in Beyond the Shadows were from future episodes. It was in those short clips when I was truly convinced that Kat was going to be a great Clary. It's incredible because even though the clips were short, I could see Clary, I could see Jace, I could see Simon, Isabelle, Alec and Magnus.

I already love Harry Shum Jr. as Magnus. All of the lines that he said were just pure gold and just so Magnus. Every actor reflected their character so well.

I have a feeling that the love triangle will be played out a lot better than it was in the movie. I really hope that I am right considering we have 13 episodes to look forward to. Again, the only clips that we saw were very short. However the chemistry between Katherine Mcnamara and Dom Sherwood was excellent. In the movie, I didn't really think that there was much chemistry between the two and the relationship just seems really cheesy. I feel like there will be more care into Clary and Jace's relationship. I can't wait to see how they present their complicated relationship.