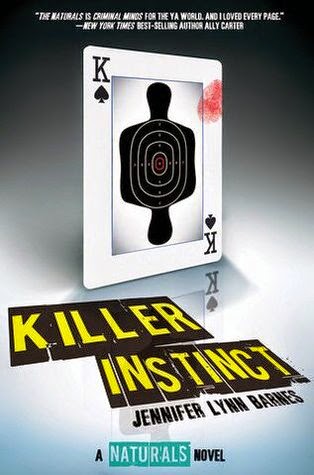 Summary:
Seventeen-year-old Cassie Hobbes has a gift for profiling people. Her talent has landed her a spot in an elite FBI program for teens with innate crime-solving abilities, and into some harrowing situations. After barely escaping a confrontation with an unbalanced killer obsessed with her mother’s murder, Cassie hopes she and the rest of the team can stick to solving cold cases from a distance.

But when victims of a brutal new serial killer start turning up, the Naturals are pulled into an active case that strikes too close to home: the killer is a perfect copycat of Dean’s incarcerated father—a man he’d do anything to forget. Forced deeper into a murderer’s psyche than ever before, will the Naturals be able to outsmart the enigmatic killer’s brutal mind games before this copycat twists them into his web for good?

With her trademark wit, brilliant plotting, and twists that no one will see coming, Jennifer Lynn Barnes will keep readers on the edge of their seats (and looking over their shoulders) as they race through the pages of this thrilling novel.

It's been awhile since I've written a real review so if this is kind of odd then well that's why.
When I first started writing on here I tried to write really formal I guess. Since then I have changed to write more in my own voice. I understand that we don't and shouldn't write how we talk, but I feel if you change the way you write too much then your personality is lost in your work whatever it may be.

Note: I wrote this review up a while ago and never posted it.. I decided to post it so here it is!

This book is the sequel to "The Naturals" by: Jennifer Lynn Barnes. I read the first book to this series this past summer. I had gone on a streak of reading a whole bunch of Jennifer's books. "The Naturals" was one of my favourites that I read the whole summer. It was the first mystery type book that I had read in a long time and I really enjoyed it.

Now going onto this new book that came out I was very excited for the release of this book. Unfortunately it took me a while to get my hands on it however when I finally did there was nothing that was going to stop me from reading it every minute I could! Lucky for me it was I Love to Read Month and I was able to read the book in class! Not only that but I went on a trip for a tournament and I read during the drive there. The book itself was very easy to read. The language in it is not very advance which makes it a simple book to read.

I don't want to spoil anything about this book because I truly think that everybody should try reading this series! I will say these books may not be for everybody. The books are not fantasy or dystopian books. There isn't anything "out of this world" in these books. They take place in everyday society. The story is about a group of teens who have unique abilities of observation who have been recruited as a part of a special program for the FBI. The books themselves are quite realistic so for those who enjoy more fantasy type fiction may not find these books as enjoyable as I do.

For those who have read my wrap-ups and have seen the books I read you would know that I like realistic fiction books. Though this book is more cheesy per say compare to The Kite Runner nonetheless is just as interesting. Unlike some of the other ones I read this book is a little lighter in that it is much less tragic. That being said these teens are very involved with killers and the way they think, what they do and their motivations. They use their abilities to get into the minds of these killers, to figure out their next move or even their next target.

There is honestly nothing I dislike about this book. Killer Instinct is written in the point of few of Cassie. Throughout the book it mentions the love triangle of Michael, Dean and Cassie. This books does have some similarities with the first book except in this case it includes more of Dean and his past instead of Cassie and her's. The way it's written and the story are really interesting and once you pick up the book it is extremely hard to put down!
I highly suggest this series to any teen looking for a good realistic crime/mystery novel! I would give this book 4.3/5 stars!