I started writing this review last year, but my review got corrupted and deleted. I had worked very hard on it and I just had trouble rewriting it. My friend recently read this book and I decided I would reread it and actually complete my review this time. So here it finally is! 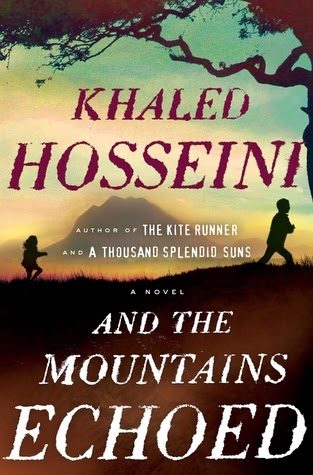 "An unforgettable novel about finding a lost piece of yourself in someone else.

Khaled Hosseini, the #1 New York Times–bestselling author of The Kite Runner and A Thousand Splendid Suns, has written a new novel about how we love, how we take care of one another, and how the choices we make resonate through generations.

In this tale revolving around not just parents and children but brothers and sisters, cousins and caretakers, Hosseini explores the many ways in which families nurture, wound, betray, honor, and sacrifice for one another; and how often we are surprised by the actions of those closest to us, at the times that matter most.

Following its characters and the ramifications of their lives and choices and loves around the globe—from Kabul to Paris to San Francisco to the Greek island of Tinos—the story expands gradually outward, becoming more emotionally complex and powerful with each turning page." - Goodreads synopsis

“It's a funny thing... but people mostly have it backward. They think they live by what they want. But really, what guides them is what they're afraid of. What they don't want.”
- Khaled Hosseini

Last year when I first read this novel I had been on a streak of reading realistic fiction books. I do enjoy dystopian and just other types of fiction novels, but I find that realistic books like this one tend to have a lot more depth and feeling. Even though I haven't been in any sort of situation even remotely comparable before. It felt so relatable to me, as if I was doing way more than just reading words off a page. It was as if the characters themselves were telling me their stories in person. The way the story is worded makes it feel as if I wasn't imagining or picturing the story in my head. To me I was just watching it, as if I actually was there when each thing happened. I really enjoy stories such as this in which the story seems to come alive and just tell itself to the reader.

There is so many different complex parts and features in this book. Though the story isn't any longer than the average book, in order to truly explain and understand anything of the story I would pretty much have to write an essay. This book is one of those novels where everything is remarkably connected. This leads to that, which caused this and so on. With this type of novel sometimes it honestly can be kind of hard to see where things are going or even to try to figure out a base storyline. I reminds me almost of a Sherlock Holmes novel in that the story is very much like a puzzle. It doesn't exactly make complete sense until all the pieces have been laid out and you finally get to the end. I personally think these types of stories are fantastic because I just love how everything is so intertwined. I also love all the moments where I finally understand how one person or event is connected to another.

Another thing I really like about the way this book is written is how Khaled Hosseini doesn't just straight up tell the story. In his last book he switched views between characters as many authors do. In this book Khaled made it so that it not only switched views, but he switched from one time period to a seemingly random one. The interesting thing was that he didn't just always go backward or forward in the time periods. It kind of varied based off which point of view that particular part of the story was. This of course did sometimes make things confusing. It did help that the chapters were labelled for their season and year, nevertheless I still found myself often rereading chapters in order to understand and make sense of what part of the story I am reading. That would be what I consider to be the con of this style, however there are a lot more pro's for it in my opinion.

As far as a general plot line for the story I would say it is kind of hard to narrow down as the story really doesn't just focus on one person or anything. Throughout the story however each person's situation seems to have some sort of abandonment in it. I think that in this book the general plot really all can be referred back to the story in the beginning. This story talks about complex idea of abandonment. A lot of what happens in this story foreshadows the rest of the book. I personally love when books do this. Whether it be with a poem or story such as this, something about it I just really like.

Here is a general summary of  a few people's life stories in the book:

1) Pari's story started with her father telling her and Abdullah a story. This story was about having the courage to sacrifice one in order to save the others. This was foreshadowing her fate of being sold. Her story goes on from there to her adapting to her new home and forgetting her old life. She now lives privileged and loved by a new family. However this doesn't last long before her life is now shifted and suddenly it is just her and her "mom" in a whole new country. Pari's life now is filled with taking care of her alcoholic mother who likes to turn people's experiences into poetry.

2) Abdullah's life changed when his sister was sold. She had been everything to him and now she was gone. Unlike her he was old enough to remember and he did. He never gave up on seeing his sister again. Abdullah's story continues with him being older and living in America with his own wife and child. His child being named after his sister. Abdullah though told his daughter lots about his sister, he didn't tell her a great deal about how hard his life actually had been back in Afghanistan.

3) Markov's narrative begins with his mother and present day friend Thalia. Thalia was the daughter of his mother's friend who had visited once and left Thalia while she was filming her movie. Though they never did see her mother again. After doing a lot of travelling and near death experiences Markov finally figured out what he wanted to do in life. This lead to his stay in Kabul where he met Nabi.

4) Nabi was Pari and Abdullah's uncle. He single handedly was the person responsible for Pari being sold. He had worked for Pari's later "mother" and he was very much in love with her. Trying to please her he did this, though in the end he was just left alone. Nabi lived his life and died at Pari's "father's" estate which he later owned. Before dying he left a letter and a request to Markov who resided in his estate.

These pieces are just small snippets of some of the main stories in this book. These are just pieces of a larger picture. Of course if you want to understand the story properly you will just have to read the book, though I hope you have already! It's hard to read these stories sometimes because I am so use to reading books in which the ending for the most part is pretty happy. However I think it is extremely valuable to read these kinds of stories as they help you realize things that you may have never thought about before.

I realize that his review was kind of everywhere at some points and I certainly seem to like to go off topic... however the point is that I unquestionably loved this book! Also that it can be confusing but in the end it really is worth it. Its rare that I can find a book similar to this one and there is definitely not many out there that are close to it. It is very unique and it written phenomenally. Each character was very well developed and thought out. He manages to tell many lifetimes of stories in just one small book. I don't think I could ask for much more from a book. This book also was a lot less sad and graphic then his previous ones. This book more then his other two could be read by a younger audience. However I would say these books are more for older teens or adults. I rate this book 5/5 stars.


Note: This is the first full review I have written in a long time so I apologize if it is kind of messy. I hopefully plan on writing more soon so in that case they will get better! Anyway hope you enjoyed the review!