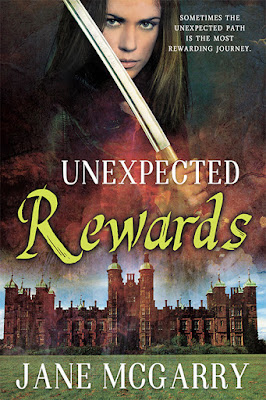 Olivia Davenport is looking forward to her future. After all, Prince Liam has professed his love and King William has promised her a reward for her role on a recent mission. She fully expects to continue her knightly training while enjoying a blossoming romance with her Prince. The King, however, has other ideas, appointing her as a lady-in-waiting to Queen Helen.

Thrust into unfamiliar territory and left to fend against the malicious women of court, Olivia feels awkward and confused. With the help of her new friend, Kat, and her sister, Anne, she tries to find her footing among the courtiers, their protocol, and the added complication of Jocelyn Crawford, a lady who has her eyes set on becoming Liam’s bride.
When, a disturbing prophecy puts the safety of the King in question, fear spreads through kingdom. Intrigue abounds at the palace with an enigmatic witch and a strict Friar at the center of the controversy. Olivia must use her training and instincts to unravel what is truly going on in order to protect the King. Through it all, she questions if she will ever be able to fit into Liam’s life and if, in the end, their love can prevail.

I was sent a review copy by Jane McGarry for an honest review.

Last year, I had the pleasure of reading and reviewing Not Every Girl by Jane McGarry but I also had the opportunity to interview her! If you are interested in reading either one of those, they will be linked above! Having said this, hopefully you got the impression that I really, really loved the first book! I have been anticipating this book for quite a while, and I'm thankful that Jane was kind enough to send me a review copy. If I didn't mention this before, this is the sequel to Not Every Girl and it was a really enjoyable read!

Going into this book, I didn't really know what to expect. I think a round of applause is needed because the events that happened in this book were certainly...unexpected. Like any other book, there are going to be faults. Even the best book in the entire universe has something wrong with it. No book is perfect. So before I get really critical I am going to point out some things that I loved...

The first thing is going to be the relationships between the characters. Honestly, this was something that I wasn't expecting to be showcased. I don't know why. In the last book, we were so focused on this one group of people and we barely got to know anybody else. In Unexpected Rewards, we are opened up to all of Olivia's relationships with her family. We are giving more of an insight on what their bond is like which is definitely something that I enjoyed.

The second thing is Puck. Even in the first book, I had this fascination for Puck and I was convinced that there was going to be a love triangle. Honestly, having read this book I kind preferred Puck over Liam.. I know how weird is that?

Olivia! Olivia has always been this really snarky and strong character. She had quite of a different role in this book and it was super interesting to read about. There were also a lot of random witty lines that were thrown in every now and then, which in my opinion were super funny.

The next thing is, the story! One thing that I ABSOLUTELY loved about the storyline as a whole is that I never saw anything coming. It was honestly so unpredictable. After I finished, it was like a huge weight was lifted off my shoulders because the events did not disappoint (I don't even know if that made sense). Not gonna lie, my jaw dropped a couple of times. Especially Olivia's first reward... If you've read the first book you will understand.

Alright...It's time for the things that I wasn't a huge fan of. First of all, it was too short. I swear, every single time I read one of Jane's books, I'm left like a child who is begging for more candy. To me, I feel like the length of the novel was a downfall. Even though this book was fast paced which is always nice, it did lead to a couple of things that I wish had more depth.

Unlike, the first book I do feel like there was more of a connection between the character and the reader. I just felt like Olivia had more relatable moments in the book than the first.

The main relationship in this novel is between Prince Liam and Olivia. Something I had always admired about their whole dilemma was the fact that it was like a partnership. In Unexpected Rewards, there was a lot more romance. Now don't get me wrong, I like romance in books but in this case I did feel like it was overdone unfortunately. It's so clear that Liam and Olivia are crazy for each other, and are clearly meant to be together but the way their relationship was conveyed in this book---it just wasn't my cup of tea. For me, I just felt like it was too cute or cheesy. Another thing is that Olivia kinda seemed a little possessive of Liam, at times it was funny but other times it just didn't sit well with me. I think that this book was just set in such different atmosphere. This is going to sound so weird, but I feel like their ending was too easy. Don't get me wrong, the road to the end of their relationship definitely had it's bumps but I wanted more. EVERYTHING IS TOO SHORT! It's so sad...

Speaking of relationships, I think it's important to point out that I've switched ships. Yes... I'm NO LONGER TEAM LIAM....I AM TEAM PUCK. It's so weird, because he's not even a love interest... Puck in my opinion is one of the best characters in these books. Alright, so if you've read these books and are very confused on why I have made this decision to ship Polivia (that's right, I made a ship name.) is because they have so much depth and I think they have chemistry. The both of them just have so much backstory, and I don't know why but I feel like Puck is in love with her. I cannot tell you how stupid I feel saying this because I interviewed Jane, and she basically confirmed that there's nothing going on with Puck and Olivia. I seriously don't know why I like this ship... Why must Jane write such likeable characters?

Not Every Girl was a very adventure filled book which is something that I really loved. This book did have an adventure, but it was certaintly a different kind. Part of me definitely did miss the sword fighting adventures. I really wish we got to see more battles but then again, that would be mildly inappropriate considering her circumstances.

Overall, I really liked this book! To me, it didn't compare to the first one but that's just based on personal taste. I thought that it was a strong sequel and I'm looking forward to reading any other Jane's works in the future! I would say that the only downfalls would be the length and the relationship between Liam and Olivia. I would rate this a 4 out of 5 stars.

I encourage you all to go out and purchase both Not Every Girl and Unexpected Rewards because they are both worth the read. Also, Not Every Girl was just recently released in PAPERBACK! So if you don't enjoy reading ebooks, you can find the physical book on Amazon! 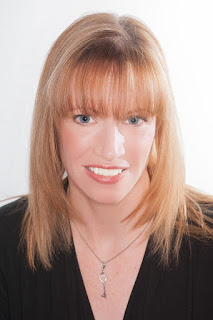 Reading was always a big part of my life. Creating my own stories developed out of this love. Finally, I decided to try my hand at writing a novel and that was when Not Every Girl was conceived.

I live in New Jersey with my husband, two sons and an extremely spoiled cat. When I am not running around with my family or writing, I can be found curled up with a good book and said cat.