If you are very unaware of this kind of post, this is basically just a post where I can list all of the things that I have been recently obsessing over. It can range from books to movies and music, it really depends on my mood.

Alright, so the first category is....

As said in my previous post, I'm kind of particular with my music taste and I don't really continuously listen to a lot of music artists.

I guess you could say that I've always been a fan of Selena Gomez, I mean the love kind of faded over the years because I started not to keep track of her work anymore. For some reason, I just decided to listen to her new album, Revival and I just really loved the songs that were on it. I honestly thought I wouldn't like it because I had only heard the songs that were released as singles or came with a music video. I was so wrong.

So here's the story behind this revived (HAHA) Selena Gomez thing, for some reason Raquel and I really like to listen to Selena Gomez's past albums when we're at her house, and I'm not lying when I say this... Every single time I leave Raquel's house after listening to all that Selena Gomez, I leave with this feeling of nostalgia. That nostalgia makes me listen to her albums when I get home, and this led to Revival.

I much prefer this album to her past one because I really didn't like that one. Maybe that's why I just stopped listening to her music for a good 2-3 years. I dunno, I just really enjoyed this one. To me, the songs were lyrically very nice and overall just pleasant to here.

The next artist is, Ruelle or Maggie Eckford. Her music has been featured on various TV shows such as Shadowhunters, The Originals, Dancing with The Stars and Pretty Little Liars. Now this isn't really a recent obsession, I started listening to her music while season 1 of Shadowhunters was airing. She has a lot of great songs, and for me it was very hard to find a song that I disliked. If you're into electronic pop (I think that's how you describe it..) then I would definitely suggest that you go and check out her music! If you watch TV, you'll probably end up hearing her music somewhere. So if you don't feel like searching for her yourself, she'll probably wind up on your favourite show or maybe she already has and you just didn't notice.

For a very long time, I was very hesitant to make a Pinterest account because I knew that I would get obsessed... I was so right, but I wouldn't change a thing.

So basically, I like to think that I'm a very visual person when it comes to creating things. To be specific, writing. Now if you have followed our blog for a while and have read every single post I've written, you would know that I'm writing a story--I refuse to call it a book because it's strange to say that and I don't know why. I used to have multiple word files that held my character boards and all of my visuals, and then I discovered Pinterest! It's so great, everything is one place and it all just looks really nice together.

I have kind of stopped with writing, and I think it's because I took a one week break to go to a festival so now my motivation is gone... Whoops.

Below are two of my character aesthetic boards that I created for my characters, Sabrina and Jeffrey. 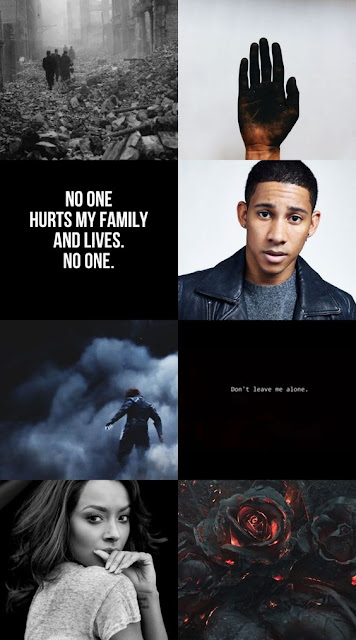 If you didn't know already, I LOVE MOVIES AND TV!

The first is a film called The Fundamentals of Caring, which stars Paul Rudd  A.K.A ANT MAN, Selena Gomez and Craig Roberts. This is a Netflix movie that I found, and had no idea what it was about if I'm going to be honest, I just put it on because I wanted something to watch.

First thought, this totally reminded me of Me Before You. Now when I say this, I don't mean that they are completely similar but there are definitely similarities you can't deny. The story is much, much more different and holds a lot less romance.

The similarities would include the spontaneous trip and the fact that there is a friendship between Ben who is a caregiver and Trevor who is in a wheelchair and is suffering from Duchenne Muscular Dystrophy.

The Comedy: For me, it's really rare to actually laugh out loud while I watch a film or TV show. This movie had me bursting out into laughter at many moments throughout the film. This is going to sound so strange, but one of the funniest parts of the movie was the peeing in the pit scene... I'm just gonna leave it there.

The Acting: The acting was SPECTACULAR in this film. That's all I have to say. However if you're wondering about the, script? Fantastic. The pacing? Wonderful.

The Anticipation: There were so many scenes in this film where I was on the edge of my seat, my heart would race and I would panic over what was going to happen next. Then it would turn out, it was a joke or everything was fine... *sigh*

The next thing is... Quantico. I'm sure that was a huge surprise for you because there definitely isn't a huge banner above this that says Quantico. So the story is, I was looking for a new show to watch because the shows I watch don't come back for a couple weeks. So one day I stumbled upon Quantico on Netflix. Can you guess that I got obsessed? Yeah I watched ten episodes in a day. It's such a gripping show and I love it so much!

The Storytelling: In a lot of ways, Quantico reminds of one of my other favourite TV shows, How to Get Away with Murder. The story lines are completely different but the way the plot is told is what makes them similar. I don't have a problem with the two being similar, I kinda love it if I'm going to be honest. It also makes sense since the shows are both from ABC Studios.

Priyanka Chopra: I love her. She's so great, she does a great job bringing the role of Alex to life. I mean all of the actors do an amazing job on the show but she really stood out to me. Another thing that I love about not only her but also the show in general is the fact is that she's an Indian actress who is the main/lead character in a TV show. I don't know about you, but that's something I haven't seen lately and it was amazing to see that in Quantico.

My favourite movie of the month was, the Miss Peregrines Home for Peculiar Children film! I really loved this movie, there were obviously things that I didn't like, one of those things being the ending. I had been anticipating this movie ever since I heard Eva Green was cast as Miss Peregrine. I don't really want to say too much considering I have written a review on the film that you can check out HERE.

I don't know why I didn't include this category in the last one. I mean this is a book blog and I somehow missed putting a book category? Oh well---It's here now.

This book blew me away. Yes, it's definitely an over-hyped book and I tend to stray away from them. Usually when I do read them, I end up being let down. However with this book, I LOVED IT SO MUCH! I didn't really like or love A Court of Thorns and Roses, I can't really give you a reason I just found it very bland and boring. With, A Court of Mist and Fury, I loved 85% of it. I believe that Sarah J. Maas has a really great writing voice and I also think that she's excellent at world building. Those two factors are things that contributed to my love and enjoyment of this novel.

Thank you so much for reading!