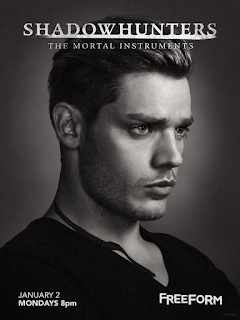 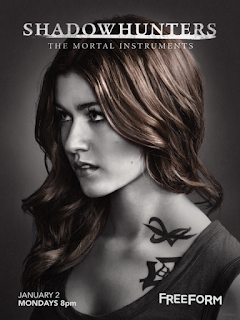 Jace's departure with Valentine creates upheaval in The Institute; the arrival of Victor Aldertree hampers Alec, Isabelle and Clary's plan to rescue Jace; Jocelyn, now awake, tries to catch up on events.


Hello my fellow Shadowhunter watchers, today I will be reviewing and discussing the first episode from the second season of Shadowhunters: The Mortal Instruments! If you're like me--you recognized the issues in season 1 but above all you still remained a fan. Or maybe you're one of those people who just saw the show for what it was and didn't really look into the details. No matter who you are---I hope that you are loving what you are seeing and I hope you enjoy reading this review!

It's been quite a while since I've written both a book review and a review on Shadowhunters. So I'm a little rusty. So recently I've been watching a lot of interviews from the new show runners as well as the cast and they all have been saying that this season is a lot darker than last season and that there is more depth. Having seen the first episode of the second season I can agree that it is darker--and I'm really liking it so far and I believe that this will be a much stronger season than the first.

Before we get into a lot of detail of this episode---I would just like to point out how much I like the design of the new seraph blades as well as the runes. I was never too fond of the both of those things and I was happy to see that they changed them. Although I will admit, it's a little odd going from the lightsaber like weapons to actual blades. However, one thing I do wish that they had with the runes was how they would fade white when their use is done with. 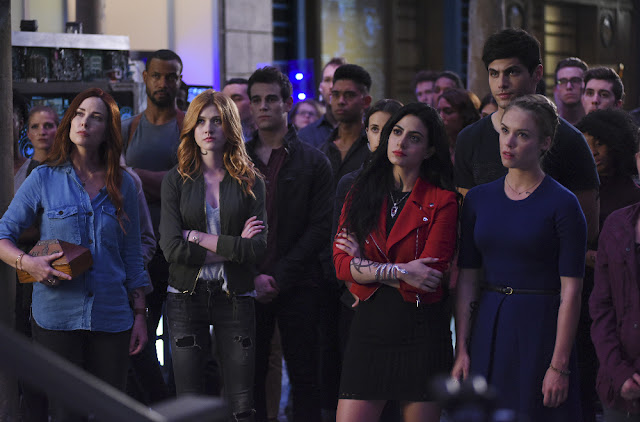 Alright---so there were a lot of things that I loved about this episode. For some reason the script was a lot better than last year. I heard that they kept the same writers but in this episode the script was actually a lot better than the first season. I think that now we have have established our base---the world and the characters it resulted in a lot less cheesiness if that makes sense. Finally---I actually saw the characters and relationships I loved from the books. A big one being the friendship between Simon and Clary (I'm sorry if you're a Climon fan and are offended by me calling it a friendship). Both Alberto Rosende and Katherine Mcnamara have great chemistry with each other on screen and from what from I observe off of social media and lifestreams they have it off screen as well. And to me that definitely shows in the show because you can kind of tell that they're not really pretending to portray the closeness that Simon and Clary have because they already have that bond. The scene between them in the warehouse was just so "Simon and Clary" if you know what I mean.

Let's talk about Valentine. Valentine is such a sadistic man but loving man towards his children and Alan Van Sprang does it so well. He just is Valentine.

It was already confirmed through Twitter that we're going to get Sebastian in season 2B (the second part of the season). And in my opinion---the show is already kind of hinting at that. For example, the way Jocelyn reacted to Jace/Jonathan being alive at the very end of the episode was just a major hint at her knowing exactly who her son is. As book readers we know very well that Jocelyn isn't in the dark about this situation. Another thing is the fact that Valentine showed Jace his memory of experimenting on him in the womb. When I first saw this I was like PLOT HOLE Jace isn't really---then I realized it's just Valentines memory and that the child is actually Sebastian. And I'm actually super excited to see how they deal with this whole Sebastian and Jace thing. I just really hope they cast a good actor because Sebastian is a tricky, tricky character.

If you're a non-book reader and are super confused on what I'm talking about. Sorry... Just read the books.

Another character that I'm really feeling at the moment is Victor Aldertree. At the moment he's kind of a pain because he's just totally messing everything up with the characters but I like what we're seeing from him anyway.

The fight scenes in this episode were just a million times better this season. There weren't any weird slow but fast FX just normal an natural movement. Still on the topic of visual FX, I was so glad to see that they changed the FX for this season because last season was just very, very tacky and unrealistic. The deaths of the vampires looks a lot better, the portal was also another HUGE improvement and the way that the seraph blades glow was interesting---still hoping to see more weapons other than seraph blades, also the glamour looks just creepier and is very much like Mystique from X-MEN. 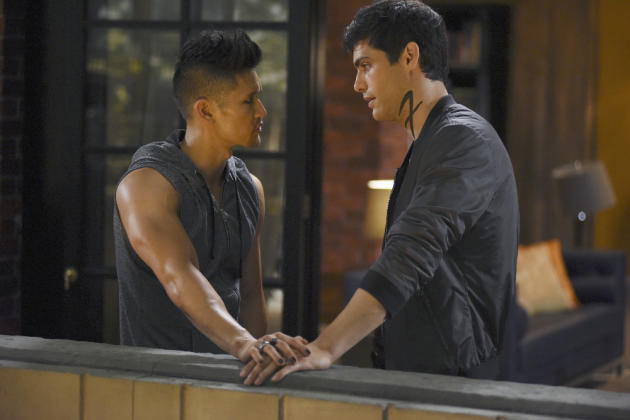 As for the structure of the episode. In my opinion it just all went by so fast and when the episode was done I was kind of just left with my hands open and wanting more. In my opinion, I felt as if they pushed so much into a forty minute episode, and we could've had so much room to spread and spread the storyline that they want to tell.

And we know that they're not really following the book, they are more so just following the main or major plot points or at least I think that's what they're doing. And you know, if this wasn't the second adaptation of the book series I would be kinda pissed but it's one of those things where we fans have to be grateful. Part of me is kinda sad that we're not going to see the books we love really adapted in the way we want but I just really hope that this show is going to get better and better. And I hear or maybe it was confirmed that we are going to get the seelie court scene!

In my opinion, the actors have really gotten a grip on their characters and it really shows in the portrayal of the characters. And that paired with the improved script is definitely paying off and we're getting to see the characters that we read about in the books.

Overall, I really enjoyed this episode. I loved how dark it was and there were so clear improvements in it as well. I hope that this will continue as the the season goes on. What are your opinions on this episode? This review was so choppy and my thoughts were all over the place but I hope that it sort of made sense.