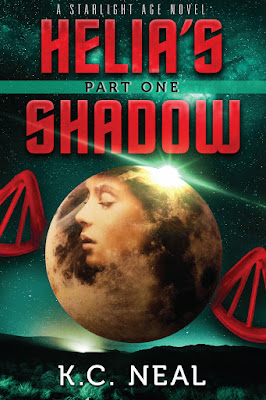 Nineteen years ago, aliens arrived on a dying Earth with advanced technology and the promise of ensuring human survival in exchange for a place to settle. They were hailed as the saviors of humans and Earth.

Today, 16-year-old Helia wants two things in life: to step out of her over-protective mother’s shadow and become an engineer, and to stop hiding her romance with alien boy Kalo. But the world definitely isn’t ready for a human-alien romance. And worse, the human-alien partnership is crumbling. Humans are being arrested without explanation. Some of them are never seen again.


When the alien leader imprisons her mother on a false charge, Helia discovers the aliens never intended to help humans at all. Now, she must join forces with alien rebels and convince the young rebel leader that humans aren't expendable. If she succeeds, humans have a chance at survival and she has a chance at love. If she fails, the dwindling human race dies out in slavery.

This Review Will Be SPOILER-FREE


I first found out about Helia's Shadow when K.C. Neal followed me on my Instagram before it was published. As soon as I read the synopsis I was instantly intrigued by the concept. I knew that I had to wait until it was published, but one of my main problems was that I don't shop on Amazon that often. A couple months later, I contacted K.C. Neal through email and she kindly let me know where I could get a copy. As soon as I had one, I dived straight into it, and loved it!

It is very common in young-adult books for the world to be split into two different societies. I was a little skeptical about how this world was going to be written. There has been countless books where it is almost identical to another. Helia's Shadow did not have that issue. K.C. Neal describes her world so vividly, and I think that is a very important factor when it comes to science-fiction books. This world is very diverse and intriguing, yes it did take me a while to adapt to this world but that is normal. With K.C. Neal's descriptive writing about the technology, the environment and even the architecture, it makes it so easy to be immersed in this world.

Still on the topic of this world, I noticed that while I was reading this, the society almost seemed like an alternate version of what earth is now, or a future glimpse of what our life could be. I believe that the environment in this book is said to be polluted, there are lack of resources, people sometimes need rebreathers to go outside, and they sometimes have to be locked inside their homes if weather is bad. That is something that I found so incredibly fascinating about this book, usually in futuristic books everything seems to be "perfect." In Helia's Shadow, it is not hidden that there are many imperfections in this society and that is something that I really, really loved.

Everything that happens in this book is so gripping. I remember there was one sentence that immediately sucked me in and kept me on the edge of my seat. There are so many moments in this book where you want to know more but you never find out and you're left frustrated but satisfied because of how epic it was.

One of my favourite parts about Helia's Shadow was Helia herself. She was a character that held herself so well, she was such a strong character. I loved how she didn't want to bring war between the humans and the Talan because usually rebellions consist of angry war. To me, Helia seemed not only strong but also so whole and pure.

Helia is romantically linked to a character named Kalo who is part of the alien group that came to Earth. Their relationship really reminded me of Tris and Four's from Divergent. They're both very bold, daring, striking and brave characters who don't let their relationship interfere with what's really going on around them. I love relationships like that, while I am still a sucker for cute romance, this was a romantic relationship that I still really loved but wasn't annoyed with.

There is a certain plot-twist in this book which I didn't really see coming. This was one of the few times when a plot-twist really surprised me. It was something that could easily be predicted with the little hints given throughout the novel, I feel like it was something about the writing and how it was paced that really made the twist surprising.

Many other reviewers have said this and that's if you love 'The Hunger Games', 'Divergent' and 'The 5th Wave' you'll enjoy this book. This book is a little similar to those mentioned, but it still stands on it's own. You have to read it to understand how unique this book is.

Overall, I would say that this was MIND-BLOWING! It is such an incredible book with amazing characters along with a cruel and unique world. This is one of the best science-fiction books that I have read, it definitely stands by 'The 5th Wave' on my all time favourite books. I would rate this book a 5 out of 5 stars! K.C. Neal is an excellent writer who describes her world with an incredible voice.