Not Every Girl Interview With Jane McGarry! | FTM 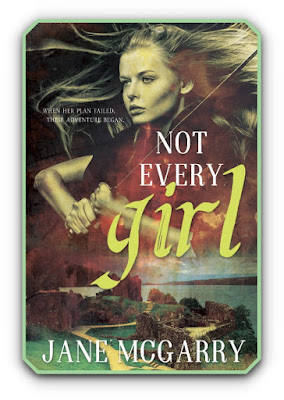 
She is going through with it anyway, of course. After all, it is the chance of a lifetime. The unreasonable rules of others should not stand in her way.

In her small kingdom of Stewartsland, Olivia trains with the squires and harbors a secret dream. She longs to become a knight under the command of the Master-of–Arms, who just happens to be her father. He has indulged her passion so far, but they both know a simple fact – girls may not attain knighthood. Dismayed by the constant discouragement of her ambitions, she makes an impetuous decision to disguise herself as a boy in order to sneak on a mission. The consequences are not at all what she anticipated.

When her deception is revealed, she is sent home in disgrace; however, an unexpected turn of events puts her at the center of a dangerous plot against the King. The ensuing adventure finds her grappling with mercenaries and outlaws, yet these pale in comparison to her newly awakened emotions. She finds not only her life at risk, but also her heart, when the aloof Prince Liam begins to affect her in ways she never thought possible. In the end, it is her courage and unique spirit which must guide her through the challenges she encounters both physical and emotional.

I received a review copy of Not Every Girl and I loved it! This book is so awesome, it is filled with so much action, and it is so inspiring. I have mentioned this before, and I will say it again. This is one of the best debut novels that I have read, and it deserves so much more attention and it deserves to be in physical form! I recommend that you go and purchase it, because I know I will be when I can!

Shortly after I read this book, I contacted Jane and asked to do an interview for the blog, and if you could't tell by now, she said yes. So here are the questions!

1. What inspires your writing, and what advice do you have for aspiring authors?


2. One of my favourite aspects of this book was how it displayed "Girl Power!" as I like to call it... What inspired you to write a story like that?
- Many books I have  enjoyed over the years have had a strong female protagonist. I wanted to write a feisty, resilient heroine who didn’t spend her time waiting to be rescued by the hero. Girls need positive examples of characters with strength and courage to help them feel empowered in life. Hopefully, Olivia achieves this in some way.


3. Time for a very serious question...What are Olivia's survival chances in ''The Hunger Games''
- Wow - great question! Certainly, she could use her wits to her advantage, like Katniss does, but it would be helpful if she had a sword. At least she would be good in water combat - Unlike Liam!

4. This book has been compared to Mulan, and to my understanding, you have never seen the Disney Film. What are your feelings towards the comparisons?
- No, I have never seen the movie! When I first heard the comparison to Mulan, I was flattered because let's face it, being compared to anything Disney has done is pretty cool. When, the association kept coming up, I did some research and found out the real Mulan (Hua Mulan) was actually quite a bad-ass chick which totally jibes Olivia. I guess it is time that I watch the movie!!

5. There are plenty of strong female heroines in
young-adult literature. How would this story be different if the main character was male? Or would the majority of the events stay the same?
- The story would have been quite different. If Olivia had been a boy, she would have been allowed to participate in the mission from the start. And though that character may have helped in some capacity in the rescue, the story itself would have unfolded the same way.

6. Are there any ideas/scenes that you though of that were not put into the book?
- There was a fun scene of Puck and Olivia sparring that was edited out. It was at the beginning of the story when Lydia gets lost. It certainly helped shed some light on the nature of their relationship. Bus alas, not everything I wrote made the final draft.

7. Do any of your characters of characteristics from you or anybody else in your life? Or were there any characters that inspired your own?
- Olivia definitely gets her sarcasm from me. Her spunk and courage are traits I only wish I had at her age. She is far more confident young woman than I ever was. Liam is what I wish guys had been at that age. He is open and straight forward and is self-assured enough not to be threatened by Olivia's personality.

8. Like many readers of Not Every Girl, we have all fallen for Prince Liam. Where is Liam's and Olivia's future heading?'
- They are made for each other, but like all relationships, they will have some bumps in the road. The bond they forged was formed under unusual circumstances -away from their real lives. Once they return home, they need to navigate fitting into each other's daily existence.

9. One thing that I had been very curious about was Puck's feelings towards Olivia. Things were left on a very open note, what is he feeling? Also does he have any romantic feelings towards Olivia, do I sense a future love triangle in the works?
- No love triangle with Puck. He and Olivia are more like siblings. While they were growing up, they assumed an arrangement would be made for their marriage. It would have been a marriage of great friendship not true love, but they had been willing to settle for that. Bot hot their futures were affected by Olivia's actions and will be sorted out in Book 2.

10. Are there are any secrets/information you can tell us about book 2? Or any hints?
- The only secret I will hint at is that Olivia receives her reward at the very beginning of book 2, and it is NOT at all what she is expecting.

Check Out Not Every Girl On Goodreads.


Purchase Not Every Girl HERE

You can find more about Jane McGarry on her Website www.janemcgarrybooks.com