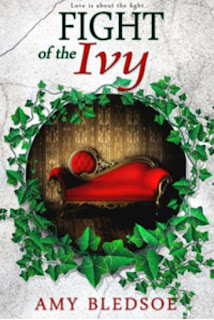 Anna's determination to pull Griffin from his old life seems an ever-losing battle. With dangers from the past still lurking in the shadows and him healing from a disabling injury, the only place he knows to turn for protection is within the dark clutch of his family. Not only outside forces threaten the future they’ve made when secrets come from inside the family's mansion, and if Anna gives up her fight for Griffin now, she may never know the depth of his

You can read my review for Tearing Down The Ivy HERE


I was sent Fight of The Ivy by: Amy Bledsoe for an honest review.


I read the first book Tearing Down the Ivy a couple of months ago and I quite enjoyed. Of course there were things that I didn't like, but I still had a great time with it nonetheless.

Something that I have noticed and loved about these two books was the writing. Amy has a different writing style that sets her apart from other contemporary authors. Amy's books feel like a TV show, throughout the whole book you feel you are watching a TV show because of all of the dramatic content. The only thing that I found that bothered me in this book was the way the dialogue was written. It wasn't really everything, there were just two little words that were used frequently that I found to be quite cliche and unrealistic even though regular couples do use the terms "babe" and "baby". In books in general, I think it's strange when couples refer to each other as babe or baby.

Besides the occasional "baby/babe", the dialogue was believable and it held that awesome TV show drama vibe that I love which I also mentioned in my past review.

Still on the topic of writing, I have also mentioned this before and that is that I feel that I'm a little old to be reading this type of book. I can definitely tell that it is intended for my age group, but I do not think I would appreciate these books as much as let's say a thirteen year old would.

A common thing that I find in YA contemporary books is that sometimes they will lack a good story and it will mainly focus on the romance aspect. These books do not have that problem. Again going back to the TV show relation, there is so much going on in these books that it does keep me from getting bored.

I am not going to go into the story much, because I am horrible at not spoiling play.

Since this was a sequel, I was looking for character development. At first I was wondering why Griffin and Anna would never leave each other's side, but then it clicked. They need each other to grow in order to become better individuals.  In the beginning, I was thinking that this was only Anna's story, but it isn't. It's both of their stories. They grew together like ivy.

I really enjoyed reading about Anna's and Griffin's relationship. For some reason, I thought I was going to grow tired of reading about their every day life but surprisingly I didn't. There is something so fluffy and paradise like about these two people that's really gripping.

On an enjoyment scale, I definitely enjoyed the first book more than I enjoyed this one. There wasn't anything technical to go along with this opinion, it is just how I feel.

Overall, I still think that these books are better for 12-14 year olds. Fight of The Ivy definitely showed so much growth in both the plot and the characters. Amy's writing will grip you from the very start, and it will continue to enthral you. Even though I did prefer Tearing Down the Ivy a little bit more, I still enjoyed this one! I would rate it a 3.5 out of 5 stars.

Check out the blogs Instagram for updates on posts!