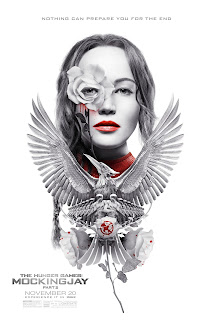 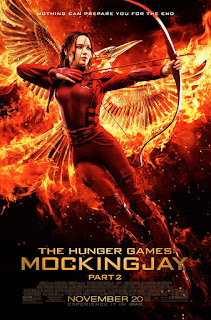 Realizing the stakes are no longer just for survival, Katniss Everdeen (Jennifer Lawrence) teams up with her closest friends, including Peeta (Josh Hutcherson), Gale (Liam Hemsworth) and Finnick for the ultimate mission. Together, they leave District 13 to liberate the citizens of war-torn Panem and assassinate President Snow, who's obsessed with destroying Katniss. What lies ahead are mortal traps, dangerous enemies and moral choices that will ultimately determine the future of millions.

You can read my reviews for:

Check our my post for 'Saying goodbye to The Hunger Games.' HERE

This Review WILL contain SPOILERS


I really don't know how to start this review. I'm sure most of you have read The Hunger Game's books as well as seen the films and hopefully you loved them just as I did. This was the very first franchise that I could follow as they made the films and it's very weird and sad that it's come to an end, and that there won't be anymore films to look forward to. This series means so much to me and it's really hard to say goodbye as weird as it may sound. Honestly, every day leading to the day I watched the movie, I was really numb because I didn't feel excitement or dread until I was in the theatre.

Before I watched this film, I heard many people say that they cried. (I cry very easily when it comes to movies.) I told myself I wouldn't cry but I obviously did. Every actor in this film, no matter how small there role was captivated me from the very beginning. They all gave a fantastic performance and it just seemed so real. There was so much character growth in so many of the characters, something that I never really imagined in the books was the amount of trauma each of the characters experienced. These films reflected each character's experience perfectly.

Something that I really loved about this film was the darkness. Throughout the film I just started comparing the first Hunger Games film and Mockingjay Part 2. It's pretty amazing to see how the world evolved and how faithful these movies were to the books. I feel like Mockingjay Part 2  really showed how corrupt the capitol was, to me it really showed me how crazy these people were. I think just seeing the murder's and death's of the characters on screen made the whole thing so much more messed up than it was the books...or in my head at least.

If you didn't know, Peeta Mellark is one of my favourite characters in existence. Josh Hutcherson could not be more perfect for the role. It was so incredible seeing this form of Peeta who was so broken in his mind. It honestly was kind of creepy seeing Peeta hijacked. For some reason, I really wanted to comfort Peeta but there was also a part of me that was like no he's dangerous which I think is a good thing because that just shows how Josh Hutcherson's performance was phenomenal.

I keep going back to how amazing every actor's performance was but in truth it really was. Every death that was shown on the screen made this huge impact on me because of how everyone was acting. Their emotion's are so raw and real, and it just makes it so moving. There were little moments where my heart kind of sunk because of their reactions even if it were for a split second.

For example, when Cresida stopped when Castor died, that really pulled at me and that was in a time span of maybe thirty seconds.

The actor's that were cast in these films are so incredibly talented. Their portrayal of the characters made me care for them in a way I never could, and it made me care for minor characters I didn't even know I could care for. This is something I love in films, a problem I have with certain adaptations that I will not name, is that they don't give you that time to breathe. In some cases, all you will be seeing in the movie are guns and romance. That isn't what I look for in movies/adaptations. In Mockingjay Part 2 there are very small time slots for the actor's to react to what is going on around them but the way it is portrayed, the way it is cut, just everything in general makes a beautiful scene. Yet it still keeps the fast pace of the movie which is something that I love so much.

A character I never expected to care for was Pollux. I have never seen this actor in anything else until now, and I was really blown away with his performance in this film. He had no lines in this film because he was an avox. Pollux had a small role in this film, but the times that we saw him my heart felt so heavy because you could really tell what he went through. Especially when we saw him in the tunnels and when his brother died. Pollux quickly became a favourite character of mine in the film.

Something in the film/the book that I found to be very interesting is how noble each character was. They would rather die than face the capitol's torture and torment, and it honestly was amazing to see how willing they were to die for each other. The actor's just brought so much life to the characters.

Now let's talk about the major deaths in the movie...

When Finnick died, it was so sad to see him die the way he did. I was really anticipating that moment because I knew it was coming and I did not expect it to be as gruesome as that. As a reader of the books, we all knew it was coming but what I found to be pretty amazing was that the tension and suspense was still there. It was so horrible to see him suffer and when Katniss set off the holo I just lost it.

When I first read Mockingjay, I was just thankful that Katniss didn't die. What I didn't realize at the time was that the reason behind everything did die. Primrose Everdeen. I really enjoyed seeing Willow as Prim. You can really tell how much Prim has grown throughout the four films. Honestly, I didn't have much reaction from Prim's instant death. As soon as everything exploded I was like, "well that was fast." It wasn't until Katniss saw Buttercup that I really came to the realization that she was dead even though I read the books, I just didn't have that feeling of sadness until that very moment.

A character that I have always disliked was Gale, in wasn't until the film did I realize how much of a storyline he was lacking. He didn't really have a path besides loving Katniss and caring for her family. I kind of wish he had more of his own story because it was kind of just sad seeing him mope over Katniss and being jealous of Peeta.

I am pretty sure I have expressed my love for Jennifer Lawrence as Katniss in every one of my reviews for these movies. I couldn't have envisioned anyone else portraying her, I'm pretty sure I would say that if someone else was playing her but luckily we got Jennifer Lawrence. To me, she just brought so much to the character and she truly is the perfect Katniss.

Mockingjay Part 2 tugged at me in a million different ways. This all started five years ago, and that time has gone by so fast. I've always known that it was going to end but I never thought that it would leave this huge impact on me. Here I am just crying over fictional characters and a fictional story. To most people, it's just a book or just a movie but to us it's so meaningful. If you just think about it, it's so weird because in reality it really is just a book and just a movie. The Hunger Games led me to so many stories and now that it's over I really don't know what to think. My heart feels so heavy, and I'm just really sad. This was the first thing that I could attach my self to, to obsess over and now I can't look forward to anything anymore. As I'm writing this, I am having so many flashbacks from when I was like thirteen and waiting for Catching Fire to come out. I'm really gonna miss everything about this franchise, so many weird memories were created from reading the books and watching the movies.

I really wish that there could be more movies and more books but unfortunately I don't know how that would work out.

As a fan of the franchise, we were so lucky to have Gary Ross direct the first film that started it all and have Francis Lawrence continue it in such an incredible way. I love how Francis Lawrence still kept Gary's original vision when he took over, because I think that is so important because sometimes other directors will butcher the other's work. These films were so amazing, they were so faithful to the books and everything about them was incredible. I doubt any of them will read this but to Suzanne Collins, to Francis Lawrence, to every actor in the films, to everyone who worked on the set  and to Gary Ross thank you, for creating this amazing phenomenon.

If you couldn't tell I loved this film. I don't think there is anymore to say. I would rate this a 5 out of 5 stars.

Has the Hunger Game's movie franchise come to an end, real or not real? Real.