So this is about my 1 year wrap-up anniversary on this blog! I thought this would be a perfect time to list my top ten favourite books that I have read over this year. Some of the books I just read, some both FTM and I have read. I will be linking our wrap-ups for each of the books so you can see how we rated them.

10) The Blood of Olympus by: Rick Riordan

I read this book in October of 2014.
This is the last book in the series. I personally really enjoy Rick Riordan's stories, I have always had an interest in ancient cultures and his stories couldn't do a more perfect job at bringing in the mythology. His stories sometimes can be a bit cheesey, but I overall enjoy them a lot.

I read this in April 2015.
This is the second book after Half Bad. This series is one of the first where I have had to actually wait for each book after the first to come out. A lot of time I pick up a series after the first two or more are out. Usually I am not really into Witch type stories, but I found that this book was very intriguing and held my interest.

I read this in August 2014.
This is the last book of Michael's Gone series. I chose the last book because I really thought this series had a phenomenal ending, but I really could have chosen any of the books. In each book Michael was able to provide an interesting story that gives us some insight, but yet still keeps up the mystery.

I read this in April 2015.
This is the book after Steelheart. I was kind of conflicted about whether I should put the first or this one. I usually just have a sort of special place for first books. It's where you are first introduced to a character, it's where all the first impressions are made. At this point you can't really say I wish that didn't happen because you don't know anything about the story yet. However this book had a lot of unique things and a lot of action. We got to see the characters in a different way and I really enjoyed it.

I also did a book analysis which can be viewed here

5) It's Kind of a Funny Story by: Ned Vizzini

I read this book in July 2014.
I had heard about the movie for this book and I always like to read the books first so I did. I found this book to be very unique. It was very well done. It is a somewhat mature book going along with the topic of suicide, but there generally is minimal gory details. I really liked this story and it was a good read.

I read this book in September 2014.
This is the first in the Chaos Walking series. Again I could have chosen any book from this series as they all were fantastic! The idea of this story is really quite odd, but I absolutely love it. I have never read such a story like this. It's like a general story about a unique society, a futuristic story even, but it has a twist. To me this twist is just so creative I can't even explain, but I highly recommend this series!!


3) A Monster Calls by: Patrick Ness 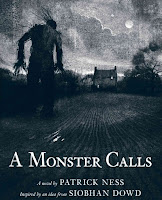 I read this in December 2014.
I was debating about whether to put this one or More Than This by Patrick Ness. I really love his books and thought both of these were terrific, but I decided to put this one over More Than This. The reason I chose to put this one instead is that this book has a sort of lesson to it. This book is kind of like a big children's book. It has pages with pictures and text and it teaches you a lesson. However there is more to this book, it isn't your typically fairy tale lesson story book. It has a lot more meaning and depth to it. It's an easy read and I would recommend that anybody willing should read this. You won't regret it.


2) And The Mountains Echoed by: Khaled Hosseini

I read this in July 2014.
I did start a review for this, but it got deleted so it never was posted. I plan to re-read it this summer and re-write my review. I love all Khaled Hosseini books. I just love the truth and tragedy in them all. The books are so realistic, but so sad. That's what to me makes them so good. It helps you realize that these stories yes are made up, but people have stories like these. These things have happened to real people. This isn't some dystopian world, this is our world. He didn't need to make up a world where people are killing each other, a world more violent. We already have one.

1) Last Night I Sang To The Monster by: Benjamin Alire Saenz

I read this in November 2014.
I read this book on the recommendation from a friend who also had read Khaled's books. This book was very different from the books I had read before. Honestly I didn't think I would like it as much as I did. Something about this book just really touched me. I know that's such a cliche thing to say, but this book made me feel something and for me when a book can do something like that, you know it's a pretty amazing book.