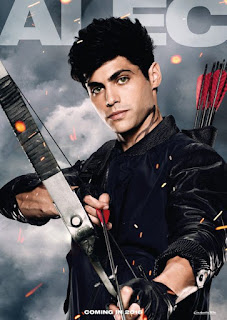 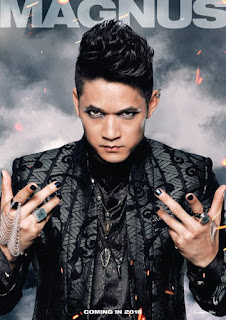 This review WILL contain SPOILERS

You can view all of my Shadowhunters reviews HERE


I feel like I have to restrain myself from watching other people's reviews before I write my own. My opinions don't change but my opinions always want to. Anyway, I thought this episode was an improvement from the last episode. It was very different from what I was expecting. Although, I did find myself laughing at parts I wasn't supposed to laugh at.

In the beginning of the episode, we see Clary and Simon talking about Magnus Bane. I thought this was a very awkward way of introducing his character into the story. I really would've preferred him being revealed with the silent brothers or maybe even her just seeing Magnus in her dreams. However, once she met up with Jace to talk about Magnus, the writing made it sound like he was an imaginary friend. She was saying something along the lines of, "I didn't know Magnus was real." It just made it sound like he was her imaginary friend when she was younger.

I think the introduction of Magnus with the necklace and Camille was very interesting. Magnus's character in the show is a little bit different than what I imagined him to be. I love Harry Shum Jr. as Magnus I think he does a great job. I just don't like the fact how Magnus is constantly just trying to hide and hide away from everything. I understand why he's protecting his people but Magnus wouldn't go into hiding like that, that's the cowards way out. Magnus is anything but a coward.

There was another relationship being hinted at in this episode and that was Malec. I really loved their interactions. I was never a 'die hard' fan of Malec in the books but I always liked them together. Magnus had all of these smug lines that were kind of directed at Alec and it was perfection. It was probably one of the best parts of the episode because the dynamic between Jace, Alec and Magnus was hilarious.

I have said in past reviews that I believe that Clary and Jace's chemistry would grow in future episodes. I definitely think that it is. There were certain parts in the episode where Jace did look like he was falling for Clary and the same goes for Clary. The scenes they have together are growing, to me there is a spark growing between the two and it's working so far. I am very happy that the romance wasn't as instant and forced as I thought it was going to be. The only problem I had with their relationship in this episode was the part where they were checking each other out, it was just bad. It was too TV show teen couple and not Jace and Clary. Hopefully their relationship won't feel like it escalated too quickly because that was my problem with the movie. 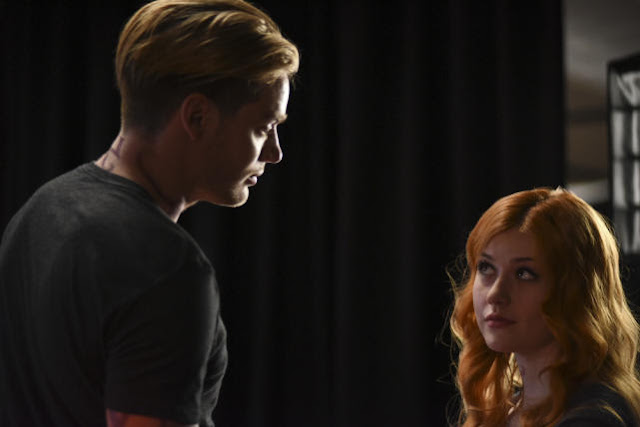 Before the party, we are seen with Clary and Isabelle. So far, I'm really liking the relationship between the two of them. Part of me still wishes that Isabelle was a little bit more mean but that's okay. So Isabelle gives Clary this dress, and I thought it was pretty funny. Clary's reaction to herself in the dress was one of the most awkward things, and to me I thought that was a pretty Clary reaction. However one of the most ridiculous lines in the show was "Someone's looking badass." I don't know who's coming up with these lines, I don't know if this is supposed to appeal to the audience they are looking for because it needs to sound more natural and not "I'm trying to sound cool for those young people."

Obviously we know that the TV show is taking a very different route than the books. So far, I have not had any problems with the changes in the show. I actually quite like most of the changes. The whole memory demon thing was very strange. I thought it was a great scene but I would've preferred not having it in general. A lot of the things in this show aren't explained very well. Everything seems like it is only for entertainment purposes and not for the storyline. Things like why is Jace drawing this rune on Clary, what was the purpose? Why do vampires want The Mortal Cup? Why did Magnus feed Clary's memories to a demon? There are a whole bunch of plot holes that I could get in to but I won't. As book fans, we know the reasoning behind some of the things but there are other aspects that seem kind of confusing. I really hope they explain the world better in future episodes, I have mentioned this before in my past reviews, I am still looking for answers.

Something that I am really enjoying about the show is that you can see the parallels with the TV show and the books. The books are there, if you search for it you can see it. You sort of feel familiar with a lot of things.


Let's talk about the acting in this show. Let me just say that the acting has improved a lot since the first episode. It's more like I am seeing the characters on screen and not just the actors. An actor that I am really happy about is Katherine McNamara as Clary, to me she has grown with her character. I feel she has great chemistry with Alberto Rosende who plays Simon, and they really seem like they have been friends for years. Another relationship are the Lightwood siblings, their banter is great. I love all of their snarky comments towards each other. One of my favourite parts of this episode is where the memory demon takes away a memory of Alec from Isabelle, I just thought that was so touching in a way.

Also can we talk about when the demon took away a memory of Jace from Alec? That part pissed me off. That was a very Alec reaction so I applaud the writers. However, Alec would not break the bond over something like that. Again, reasoning needs to make sense with the characters and has to be explained. I honestly just thought that happened because they wanted Clary to kill the demon.

A part of Clary that I wish was kept in the TV show was how bad she was at being a Shadowhunter in the first few books. I would've been okay with her training a little bit early, but the fact that she knows how to use a Serpah Blade so easily with a lesson that lasted one minute is ridiculous. It's not realistic even though it's a fantasy world, you can be reasonable.

An actress that I was surprisingly pleased with was the actress who is playing Maureen. I was really skeptical with how they were going to portray her character in the show since she is quite older than she was in the books, but her character seems to be going on a very interesting road. I can definitely picture where the writers are going to take her in the show but then again, I don't know if I'm correct. I really do hope that we still somehow get the weird obsessive Maureen that we got in the books.

The visual FX in this episode weren't that bad. It is not believable what so ever but I found it better than the weird demon sparks and burning skeletons from the past episodes. If we get future seasons, I'm sure that things will improve.

Overall, this episode was an improvement. There were a lot of unexplained things in this episode but besides that I really enjoyed everything. This show is definitely focusing on the relationships and the characters and I'm quite glad that they kept that promise. The only things I would like to see are improvements in the script as well as the explanation. I'm pretty sure that's what I said in my past review. I really would like this show to be successful, these books are great and it would be a shame if this adaptation failed because we probably won't get another chance for them to be adapted. I would rate this episode a 3.5 out of stars.