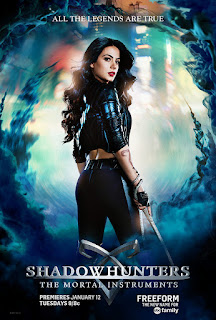 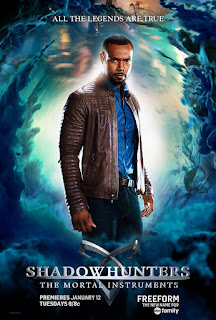 Luke is taken to Magnus' lair in the hopes of saving his life; Clary learns about Valentine's dark history and Luke and Jocelyn's past; Isabelle and Alec attempt to restore their family name in the eyes of the Clave.

This review WILL contain SPOILERS for both the books and TV show.

You can view all of my other Shadowhunters reviews HERE

Episode 6 of Shadowhunters has been released! I have really loved this episode, there were certain things that were revealed that were from the books and I am so glad that they're including them. There were rumours going around saying that the writers weren't going with the original storyline with Jace and Clary, it seems like they're going down that path and I am glad.

This has nothing to do with the review but I am so amused when I see non-readers on youtube try and guess what the book fans mean. It's so interesting.

Last episode, a certain box was revealed. For the people who have read the books we know that, that box belongs to Jonathan Christopher A.K.A Clary's brother. I was very happy that they revealed that in the show, I think the way it was portrayed in the show was very good. Not only did they include her brother but they showed Clary's special ability. Now, she knows where the cup is and it seems like things are going to pick up very soon.

This is my personal opinion, but I really love Katherine Mcnamara as Clary Fray. I definitely think that she has been growing more and more into her character especially when you compare it to the first episode. Clary is a very complex character, she is one of the main protagonists, there is also a lot of pressure to do this character justice, and she has to compare to Lily Collins. I think fans have to understand that it's only the first season and that it takes time to grow into your character.

If we get a second season, and hopefully we do! I hate saying this but I think we should get new writers. To me, the writers aren't really capturing some of the characters. They got Magnus and Simon and that's about it. There are certain times when I am like "oh yeah that sounds like the character" but in most cases it's not. So far, they have not really captured Jace's sarcasm or much of his arrogance. Right now, Alec and Jace's lines are reversed. It's like their personalities have switched. The lines that come out of Clary's mouth are just a little weird.

Also I don't believe there is enough explanation in the world building. As fans, yes we know most of the things they are trying to convey but the added things are things that don't make sense. Every time I see a change, I am always okay with it but what I need is an explanation and what's the greater purpose of this change? I think we need more writers who understand and have more experience with writing fantasy shows.

Currently, the script is the weakest part of the entire show. I honestly believe that the script is what's making the actor's seem like they're doing a bad job at portraying their roles. 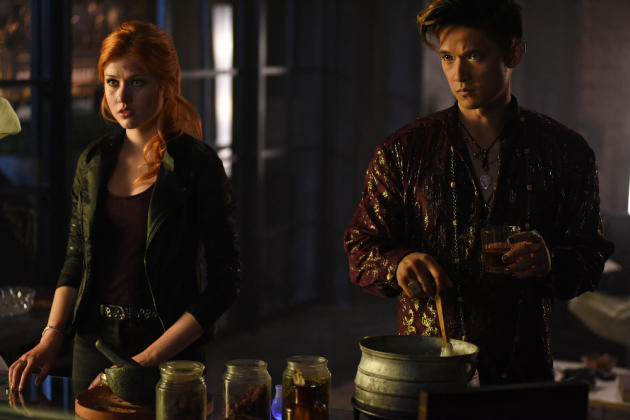 We got flashbacks in this episode! I found this to be very exciting. I had a little bit of a problem with the staging of things, and I didn't like that there was a blue filter on all of the flashbacks. However, I really liked the storyline between Valentine, Luke and Jocelyn. I really would've liked to see Jocelyn pregnant because she did run away with the cup when she was pregnant right? Also I would've liked to see little Jonathan Christopher. For some reason, young Valentine reminded me of movie Valentine... I don't know why. I loved the scene where he was injecting himself with demon blood, it honestly kind of freaked me out and I found it a quite disturbing.

I loved the part where Luke mentioned that both he and Jocelyn loved Valentine. I thought that was a small detail that needed to be mentioned. I don't feel like they explained Valentine's backstory/the circle's backstory that well, again going back to the writing. It had so much potential to be this really interesting storyline but it fell flat.

One of my favourite parts of the flashbacks was where Jocelyn jumped off the building to save Luke. She just looked really cool while doing it.

There was a scene with Luke and Jocelyn where she tells him to tell Clary everything. That scene kind of confused me. Was Luke actually seeing Jocelyn? If so, how can he see her? Was it a dream because it seems like the show just loves doing dream sequences.

Something that has been hinted at in the show is Simon's transition into a vampire. I find it really strange how he's already gaining certain abilities. I think they're going to make Camille the sire to Simon. I don't really know why the show runners did this, I'm thinking that it might be because the actress who plays Camille is a stronger actress or it could be for more weird sexual interactions between the two.

I'm really glad that the show is very interactive with their fans. I really do hope that they are taking our suggestions and complaints seriously so they can use that to make things better for next season because it seems like they did that when we first the seven minute clip.

In this episode, we were introduced to Max Lightwood. First let me just say that this kid is adorable. Second, he looks nothing like any of the Lighwoods. Third, I don't wanna see him die. I thought all of his scenes with his siblings and parents were great, and really, really cute.

We got alot of Malec in this episode and it was great. That's all I'm going to say, it was so awesome to see them together on screen and I'm looking forward to seeing them more in the future. 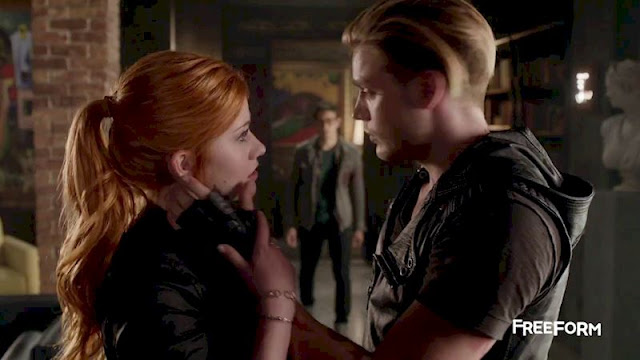 There has been a lot of arguments talking about Jace and Clary. People say they're going to fast or they're going to slow. I wanted to be like, "dude, the books take place over the course of a few months." They fell in love in like two weeks in the books and you say it's too fast in the show. I have said this in my previous reviews and I will gladly say it again. I think Jace and Clary have chemistry. However, I only stand by this opinion when their relationship isn't being forced. When they're not trying to make things seem sexual or romantic that's when I'm like there's the chemistry!

People have also been saying that Dom should keep his british accent. I kind of agree. I mean Ben Barnes had a spanish accent in the second Narnia movie and then suddenly had an English accent in the third, so why can't Dom just suddenly change his accent? I honestly wouldn't mind because I feel like it would make his speech seem more natural.

I will also say this again, watch Vampire Academy if you're not convinced that Dom can't act. Do it. It sounds cheesy, but it's not. He's great in it. So WATCH IT.

Overall I still have hope for this show. I am really enjoying it so far. I still think each actor's acting will improve in future episodes. I really want everyone to try and be positive so we can future seasons. This is possibly our last chance for an adaptation to be successful. I would rate this episode a 4 out of 5 stars.