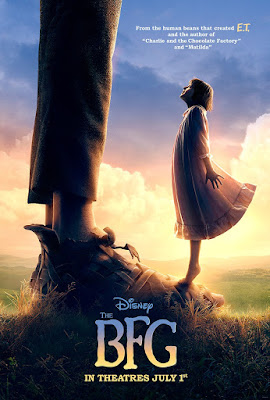 The Big Friendly Giant is nothing like the other inhabitants of Giant Country. Standing 24-feet tall with enormous ears and a keen sense of smell, he is endearingly dim-witted and keeps to himself for the most part. Sophie, a precocious 10-year-old girl from London, is initially frightened of the mysterious giant who has brought her to his cave, but soon comes to realize that the BFG is actually quite gentle and charming. Having both been on their own in the world up until now, their affection for one another quickly grows, but Sophie's presence in Giant Country has attracted the unwanted attention of the other giants, who have become increasingly more bothersome. Together, they come up with a plan to get rid of the giants once and for all


The BFG or "The Big Friendly Giant" as Sophie calls him is a new Disney movie directed by: Steven Spielberg. If having Steven Spielberg wasn't one of the best parts of this film, the fact that it was released on CANADA DAY is super awesome. This movie is based off of the book by Roald Dahl. I went into this movie not really knowing anything about it, the trailers had instantly pulled me in, and it wasn't until I saw the film did I realise that it's based off a book.

As I watched this film, I found that I didn't have any flaws with this book. I researched this a little bit online and found that it hasn't been doing so well at the box office despite it having some really great ratings. Obviously, there are some people who are giving this movie a lot of negativity and are saying that Steven Spielberg has lost his touch. I would have to disagree because some of my favourite movies are directed by Steven Spielberg. I feel like people think this is a bad film because it isn't an what he would typically direct. There are theories out there like it's not selling because Steven Spielberg isn't relevant anymore etc. Sometimes, I just want to step up on up to them and ask them, do they know which movies that are out in theatres right now? For me at least, I did not find that much publicity went into this film it was either that or the fact that Finding Dory is all the rage right now and I know why because I LOVE FINDING NEMO.

The BFG is a work of art in my opinion. It embodies so many things that I think a lot of films should have. For me, movies are not only for entertainment and I just feel like I view things in such a different perspective than most people. That's what most people go see movies for, to go be entertained. I like to have an experience when I watch a film, I want to feel like I'm going on a roller coaster without feeling the thrill of a choppy meaningless movie.

This movie brought so many things to the table and it's a shame that it's not doing well at the box office and that people don't want to see it. It's a movie that has such a vivid and intricate story that will warm your heart but will also bring sadness in the film's darkest moments.

In my opinion, it can be very difficult to connect and absorb a storyline through CGI. Honestly, everything about this movie felt so real. The giants were animated so well, and there was so much detail from the structure of their body to the crinkles in their faces. They seemed so life-like and it was definitely one of my favourite parts of the film.

The characters in this film are so fun and interesting to watch. A big factor that contributed to this enjoyment was the terminology that the giants had. It's one of those things where you can't help but smile because of funny or sweet something is. With The BFG, you can't really go wrong. It's Disney, Steven Spielberg and a hand full of wonderfully talented actors working together to tell a beautiful and well crafted story.

I can't really speak on whether or not this book is loyal to the book or not. Since this is just a movie review, I would just like to say that whether or not you are a fan of the book this is a movie that you should go and see by yourself, with your friends or your family.  There are many things that contribute to this film that make it absolutley incredible. This isn't a typical film that you would usually see, it's so different and so rare nowadays and I would suggest that you go out and watch this movie.

Overall, I would say that this one of my favourite films of the year! It was such a lighthearted film that still kept me on the edge of my seat. It tells an incredible and enchanting story! I would rate this a 5 out of 5 stars.

Check out our SOCIAL MEDIA for updates on our current reads and future projects.
'