Legend is a futuristic dystopian young adult novel. It is a New York Times  BESTSELLER and is very popular among the teen ages.

Fun Fact: "Marie Lu was first inspired to write Legend while watching Les mis one afternoon and wondering how the relationship between a famous criminal and a prodigious detective might translate into a  more modern story" Said in Marie Lu's biography. 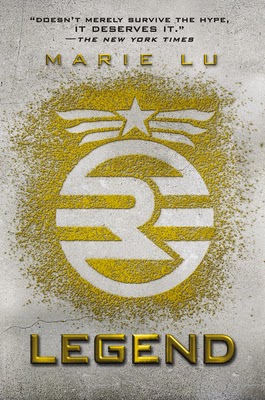 Legend follows the two main characters, Day who is the most wanted criminal in the Republic and June who is the Republics darling and prodigy. June has an older brother named Metias who is a Republic soldier and was killed while performing a mission. Day is automatically accused of Metias's murder and June is sent to find him. On her mission, she ends up saving a young girl named Tess who was close to fighting in a illegal Skiz fight, after the fight Day saves June. The three rummage together on the streets, and yes this story is a love story, Day and June fall for each other, or become attracted to each other. And together they will unravel the Republics secrets.
Legend is fast paced, and is quite short that it feels like your watching a movie, only in your head. The different POV'S help you understand the story more and let you get to know and understand the characters. And I would say that this story has very shocking turns of events, but if you look closely you can somewhat predict what's going to happen later on in the story. But it is very interesting reading about how the characters reveal and learn things about the world they are living in.
To anyone who is reading this and expects this to be a "Hunger Games" novel, it isn't. It's more action packed, and just because it's futuristic it does not mean it's going to be EXACTLY similar. Legend, is more like an action movie, it's quick and easy. A similarity between the two would be the society that they live in, there are the rich and the poor, and the dark terms of the government.
Overall, this book was VERY good, I would recommend this book to anyone of any age. And the second novel, "Prodigy" is EVEN better! So I would give this book a four out of five stars. I hope you enjoyed reading this review.

If enjoyed, please feel free to follow OUR blog. More posts are to come!

I (the writer of this particular review) have an instagram.
@bookishfandoms1405

Did you enjoy this review?